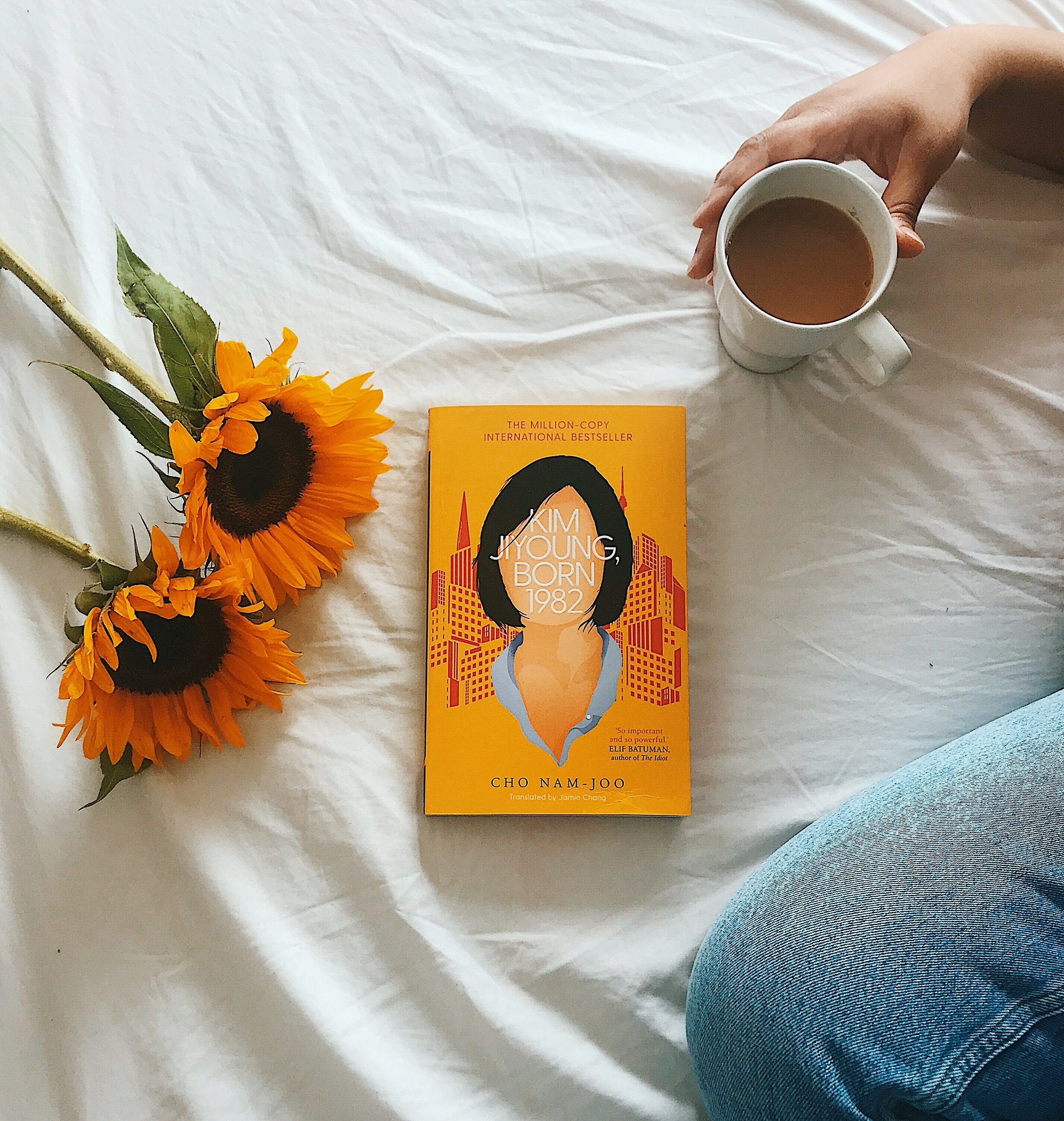 Have you ever loved a book because you hated reading it? Cho Nam Joo’s Kim Jiyoung, Born 1982 is one such conflicting read.

KIM JIYOUNG is a girl born to a mother whose in-laws wanted a boy.

KIM JIYOUNG is a sister made to share a room while her brother gets one of his own.

KIM JIYOUNG is a daughter whose father blames her when she is harassed late at night.

KIM JIYOUNG is a model employee who gets overlooked for promotion.

KIM JIYOUNG is a wife who gives up her career and independence for a life of domesticity.

KIM JIYOUNG is her own woman.

KIM JIYOUNG is every woman.

Kim Jiyoung is a 33 year old woman who is driven to madness by the machinations of systemic misogyny. In the beginning, Kim’s sudden psychosis can come across as a touch dramatic. This rapidly changes as you turn the pages and step back in time to trace Kim’s life from birth. The everyday struggles faced by women against ancient, endemic misogyny is hardly new knowledge. Every single life event that leads up to Kim’s mental breakdown is believable and relatable. In fact, its too relatable.

Born towards the end of the twentieth century (1982), a few years before me (1989), Kim’s story unfolds like a minefield of triggers. From the moment she was born as a girl and not the boy her family wanted (apparently my late father joked at my birth that he didn’t really have to rush to the hospital for a second daughter) to her experiences as a young mother faced with the seemingly impossible balance of career vs childcare, the extent to which the circumstances surrounding our pivotal moments compared was too close for comfort. Had we bullet pointed a ‘highlights of my life’ summary on a piece of A4 paper, we could have exchanged it and no one would have noticed. That is the stronghold of the patriarchy. It clenches us into submission until we ooze out from its powerful fingers as mass produced factory objects. Our dreams are trimmed, our passions crushed, our rights stifled, until we are shaped by the suffocating mould of misogyny to become indistinguishable. Insignificant even. 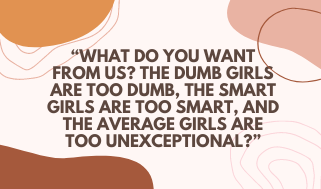 Kim Jiyoung might be a fictional character but her story, supported by footnotes that reference real world statistics, could very well be a memoir. In Korean language, Kim Jiyoung is equivalent to a Jane Doe. A faceless woman who wouldn’t stand out in a crowd. She is the everyday woman who keeps getting knocked back by misogyny and sexism. So much so that she eventually loses sense of self. Despite Korea introducing legislation against gender discrimination during Kim’s early adulthood, the discrepancies manifested themselves everywhere – at her workplace, in her marriage and in her experience as a young mother. 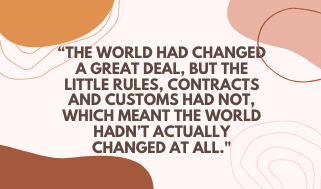 Growing up as a millennial woman

As a 90s kid, I thought I had it good. Even though I got groped at Banijjo Mela, gaslighted by my ex, and received sexist behaviour at university (British university, may I add, not Bangladeshi), I held onto that belief. I had internalised misogyny from a young age without being aware of it. It’s the 21st century, I reminded myself, I had it good. I brushed off my experiences with gender discrimination, misogyny and sexism with the foolish optimism of the ‘modern woman’. I believed that if I took the occasional inconveniences and mistreatment on the chin, I can win. And then I got pregnant.

Nothing puts the spotlight on gender inequality like procreation. Starting from insensitive workplace reactions to pregnancy news, to snide comments likening maternity leave to ‘paid holiday’, to shouldering the lion share of parenting duties to being criticised for your choices whether you stay at home or return to work, the odds start stacking against you with ruthless speed as soon as the two red lines appear. You start realising that the ‘modern woman’ label is nothing less than a vicious trap. You are expected to deliver on the professional front while fulfilling the traditional roles at the home front. Your life gets transformed beyond recognition but not your partner’s, at least not to the same extent. Everyone praises him for ‘helping out’ while you are scrutinised for every action that doesn’t directly serve your home or child. If you work, you are not spending enough time at home. If you are staying at home, people treat you as a time waster. No one is willing to put a value to the unpaid labour of motherhood – maybe because then someone has to pay up. And it is one such event, when someone calls Kim a ‘momroach’ as she is trying to enjoy some hard earned me time over a cup of coffee, that drives her towards psychosis.

I grew up in a matriarchal household. I watched my mother, aunts and grandmother fight the odds steeped against them in a male dominated society from the moment my senses came to be. You could say that early exposure to real life sheroes shaped me to become a fierce lover and supporter of women. It tuned the most empathetic corner of my heart towards their fights and challenges. But this nascent, unnamed feeling (that I would later term as feminism) didn’t serve me when I was younger. I gave in to mistreatment at the hands of the patriarchy and watched as a useless bystander as my loved ones did too. The image of a young woman stripped off in public on a fateful New Year’s Eve remained plastered to my eyeballs throughout my teenage years. I could afford to be angry in private but I didn’t have the guts to be vocal in public. My internalised misogyny clouded my abilities to judge between right and wrong. It was only after I got older and started viewing life through the lens of experience, that I started to smell the BS. I turned past events over in my head until the mistreatment and oppression manifested themselves loud and clear. It made me profoundly angry. I carry that anger in my body, like a constant bellyache. At every turn of society, I started seeing the ways in which women are being hammered into settling for lesser than men. I started reading up on feminism. It made me more angry. But it also helped me process that anger by learning from those who had processed it before me.

I am a feminist. A feminist is someone who wants equality for women and men. Why then are so many women hesitant to use the F word? Maybe the anti-feminine associations put you off (fyi, you can totally hold feminist opinions and be as outwardly feminine as you please). Maybe as a coloured woman, mainstream feminism doesn’t speak to you. Certainly the new wave of feminism is riddled with contradictions that can leave you feeling more confused than empowered. I get it. I do. But, as Reni Eddo-Lodge puts its in her bestseller ‘Why I Am No Longer Talking About Race‘, feminism can serve as a powerful framework to understand the world around us. Just having a name to what used to be a ‘feeling’ has made them more valid for me. Thanks to Kimberlé Williams Crenshaw, that named feeling further evolved to become intersectional feminism that aims to include intersectional systems of society such as race, gender, class, ability, and ethnicity to understand the unique experiences of feminism across the world. I love this journey of evolving as an imperfect feminist-in-progress that gives me room to learn and improve. I believe that when we start educating ourselves, raising voices, sharing knowledge and standing in firm, unwavering solidarity, we can translate legislation on paper into real life decisions about who’s making dinner tonight.