This post was originally written in 2015 for my old blog. Chitkadoni is a Bengali word that refers to someone who cries very often. A lot of my past is resurfacing in lockdown as memories. This post is a tribute to them.

The tears rose inside her lungs, breaking and scattering with each ragged breath. A shudder ran through her body, tightening into a climax, rippling through the struggling tears and calming them down. Why was she crying? She considered this for a second. She knew the answer, or at least where it hid in the back of her worn out senses. Waiting for her to be weak. She shook her head in dismissal. She knew better than to take 12 am thoughts too seriously.

The fragile resistance of female tear ducts has been her oldest frenemy. Relentless yet relieving, mostly embarrassing, it was more often a foe than a friend. She hated it’s guts, hated the way it stripped her of her pride, the way it exposed the lack of her inner control. Her struggle to tame them was no less than a millennium old.

31st December, 1999. On the dying second of a world-war-ridden century, a young girl stood staring at a starry night from the verandah of a cramped Dhaka street. Immersed in the throbbing cusp of two entire millenniums, she was taught to dream of magic. She was the 90s kid who would get to grow up as a 2000s adult. The millennial kids were special, she knew. As the clock struck 12, crudely built fireworks rented the polluted Dhaka air. She exploded with them, bursting into tears of wonder. On a big box in the dark living room, the world beyond hers erupted in unison, echoing off the cramped alleyways of Dhanmondi.

2000 was the harbinger of newness. The teacher wrote the date on the whiteboard differently. Her world – home and school – shifted to better shores where the streets were wider and fireworks weren’t blocked by urban density. She had given up her blouse and skirt to wear salwar kameez to school. She was a grown up 2000s kid in every visible way. Unlike periods and puberty, there were no telltale signs of the mental growth of a young girl. No one could see how she remained trapped as a child in an adolescent body, that she hadn’t quite made the millennium leap.

Her earliest tearful memory of childhood was from the roof of her Dhanmondi home. She was standing in line with her siblings, watching the family car being driven away from Boro Nanu’sgarage. It was no longer theirs, she knew. She couldn’t recall how she made it school that day but she remembered spending the rest of school life in rickshaws and CNGs, making mamas and chachas from all walks of life. She remained a permanent name on the ‘Bus Student’ list, as did her siblings, till the family moved close enough for her to make it to school by foot. The unfootable distances remained adventurous family challenges, amusing at best, precarious at worst. It wasn’t unusual for her to travel from Dhanmondito Uttara on Mother’s lap with her head wedged in weird angles against the roof of baby taxis in an attempt to accommodate her growing teenhood. The traffic in the city grew at the same pace as the limbs in her body but Mother kept insisting 17 wasn’t too old for her to ride on her lap for an hour. Or two.

She was a chitkadoni, but that didn’t make her weak or fearful. She wasn’t afraid of the world outside her home. She was book smart and street smart too. What else could you afford to be as a middle class citizen in an absurdly third world city? What couldn’t kill you here only made you stronger. She learnt to conquer fear way before she was old enough to understand it. She hailed down rickshaws to New Market, braving the rowdy crowds with Mother while the other millennial girls waited patiently to be accompanied by their driver bhais. The cooler kids called them ‘chauffers’. She certainly didn’t have one at home. Her after school adventures were few and far between. She spent most weekday afternoons unchaperoned and locked in with her siblings, waiting for mother to be back from work with an armful of Nilkhet books.

She wasn’t pampered, but she was sheltered. She wasn’t spoilt, but she was loved. She was given just enough of the necessary things and she learnt to make a world out of them. She made her way from narrow Dhaka streets to places too wide and far for Mother to carry on her lap. She slogged through a hard degree that wasn’t her choice and through harder relationships that lead nowhere. She gave up her Dhaka dream making homes away from homes, working jobs that allowed her to be independent, doing chores that made her feel like she was a responsible person. She had to prove to herself that she was all that the 21stcentury needed her to be. She couldn’t bear to appear slacking or lacking after everything Mother had sacrificed.

Yet as she went along her valiant ways, she cried like a helpless child. There was a permanent sadness in her heart that showed itself in every pause life allowed her to take. Something so vital was amiss, as though she had skipped a few important detours in her haste to catch up with the millennial life. The kalboishakhi jhor that had once flooded her narrow Dhaka streets were now brewing too close for comfort. They were in her heart, and no longer seasonal.

They were a nuisance. But tears were powerful too, she realized. She could win battles she deserved to lose by the virtue of her sensitive tear ducts. She could lose battles she deserved to win by the same. Tears were a double edged phenomenon, both wand and weapon. And an excuse to take flight when you couldn’t find it in you to fight. It was easier to cry out untapped emotions than to address them. Easier to feel the pain dig at her chest than weigh on her mind. A good lungful of tears later, she was the docile 90s kid. Every fire inside her was doused in a cold calm, the one that descended after the storm, with flooded streets cheeks, messy puddles hair and the smell of earth acceptance.

He wiggled to signal for her, bringing her back from her scattered thoughts to the marital bed. She could sense his movements in the darkness. He loved to be hugged to sleep and this was her cue. She dutifully shuffled closer, burying her unbrushed curls in the small of his back, soundlessly inhaling an airful of him. So alive. He got grossed out every time she would graze his skin with her snubby nose but she didn’t care. By now she knew how to be secretive. That smell was important to her. It meant her day was finally coming to an end.

Situated close to her overly developed tear ducts were her unusually developed olfactory senses. She loved inhaling the comfort of a brand new book, the promise of freshly cut flowers. Matters of the nose usually ended there but hers was a curious one. She was often caught sniffing odd things in passing. Food that had gone off, clothes that had overstayed in a wet laundry cycle, moist patches on damp walls. Even when the smell was foul enough to make her recoil, she couldn’t seem to stop. No she didn’t like it most times but it was just something that she did. He had caught her red handed one time and she had laughed at his undisguised horror.

Mother’s was the first human smell she grew to love. She would sit on the corner of her bed and watch her tiptoe around her room wrapped in a massive white towel, smelling of home. It was something so deeply embedded in her mind that she would recognize that scent blindfolded in the pits of hell. Humans don’t exactly smell divine. But she found something reassuring about them. There is this potent something that you cannot ignore or mask. Was it the thrill of mortality? The dead couldn’t smell like this. This, the human smell, was for the living only. A secretion of the soul. Somehow the soul had chosen an organ as peculiar as the armpit to manifest itself. Humans don’t like armpits. They like hearts so they say they feel from it. They like brains so they call clever people ‘brainy’. No one seemed to be an ‘armpitty’ person. Certainly not him. He loved drenching himself in other smelling things. She didn’t quite understand it. Why was the world so busy convincing you to smell like chemicals when you had your own smell to wear?

She placed her cold feet on top of his, resting her head on his bony back. Every night she exploited his body, erected it like a fence around herself, locking herself in his warmth so that her flyaway thoughts could be put to rest.  Ah, she could finally just be.

The tears were coming to an end now. She faintly wondered again why she was crying but sleep was flooding her eyes, intoxicating her. Did sleep live in the brain during the day to descend on the eyes at night? She tried dwelling on that thought but sleep was too fast for her.

Her eyelids fluttered a few times, then relaxed. A last tear leaked from her resting lashes, smelling of her dreams.

You may also enjoy: 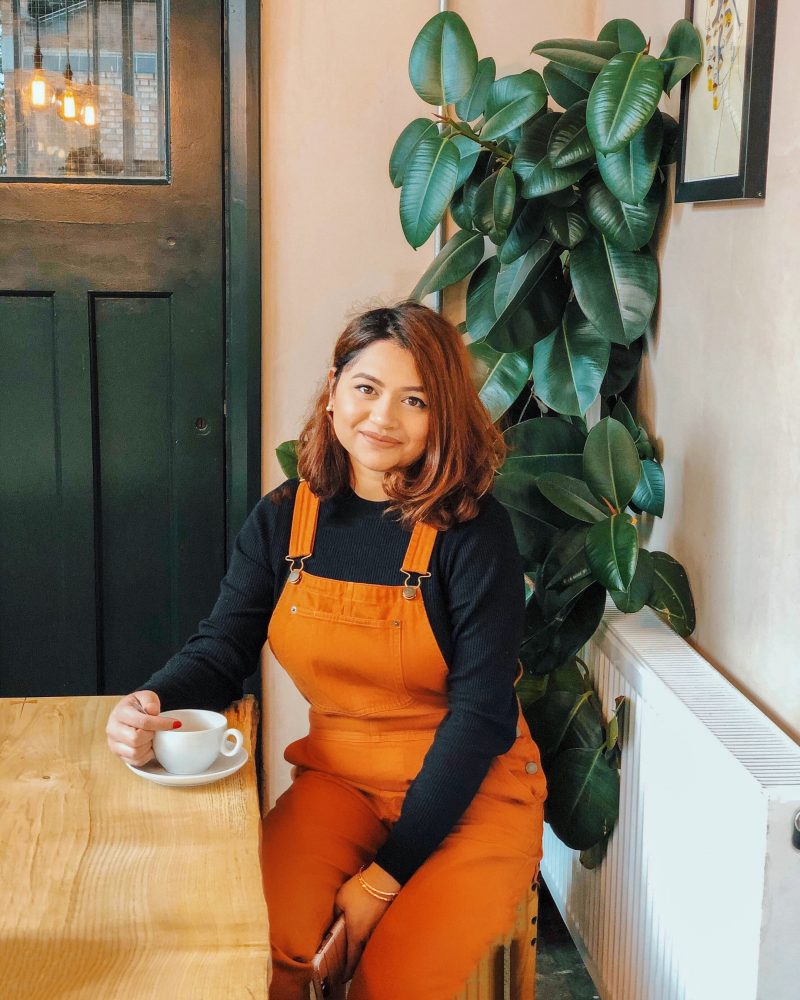 Hi, I am Samira aka The Millennial Ma. Mummy to Aryan, wife to The Millennial Baba, Air Traffic Control Engineer by profession and a passionate writer at heart. I love storytelling and dabbling at creative content so here I am, trying to fulfil my true calling. I blog about parenthood, books, intersectional feminism, immigrant life and all the in-between stuff that inspire me. Welcome to our little corner of the internet. It’s lovely to have you here!