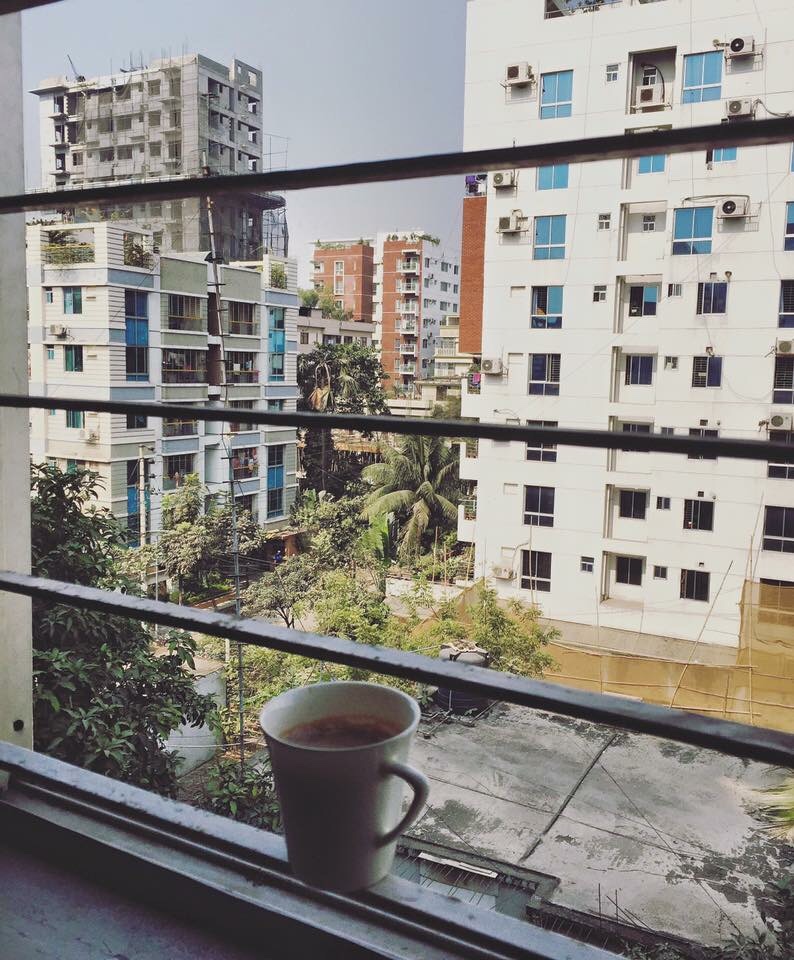 Hurtling through the Dhaka air, it all felt like a dream. I sat very still as the big bird whizzed past a kuasha-laced landscape that could easily have been mistaken for any other city in the world. Night time arrivals can feel a bit ominous like that. There’s no instant visible gratification. One can never quite tell when to expect that first hit on the tarmac. You look out for it mentally – that resounding, confirming jolt. A physical connection, something tangible. The adrenaline rush as you vacillate between the probability of life and death is nerve wracking. Some pray during those final seconds, others just wait it out.

I pray…when I can remember to. This time I feel paralysed. The view from the window blurs in the corner of my eyes, growing steadily more and more discernible. The tears blossom fat and large. I don’t move my head as though the slightest hint of motion could whisk it all away. When I finally dare to look, the ubiquitous naarikel gaach winking from the distance unravels me. Something untightens in response. How long have I been holding this tension inside?

The plane hits home. A cacophany of clicking seat belts and beeping phones arise from the weary passengers. No one gives a damn that the airhostess wants you to stay put. I already have one missed call and Flexiload balance of 500 BDT. Welcome to Dhaka! 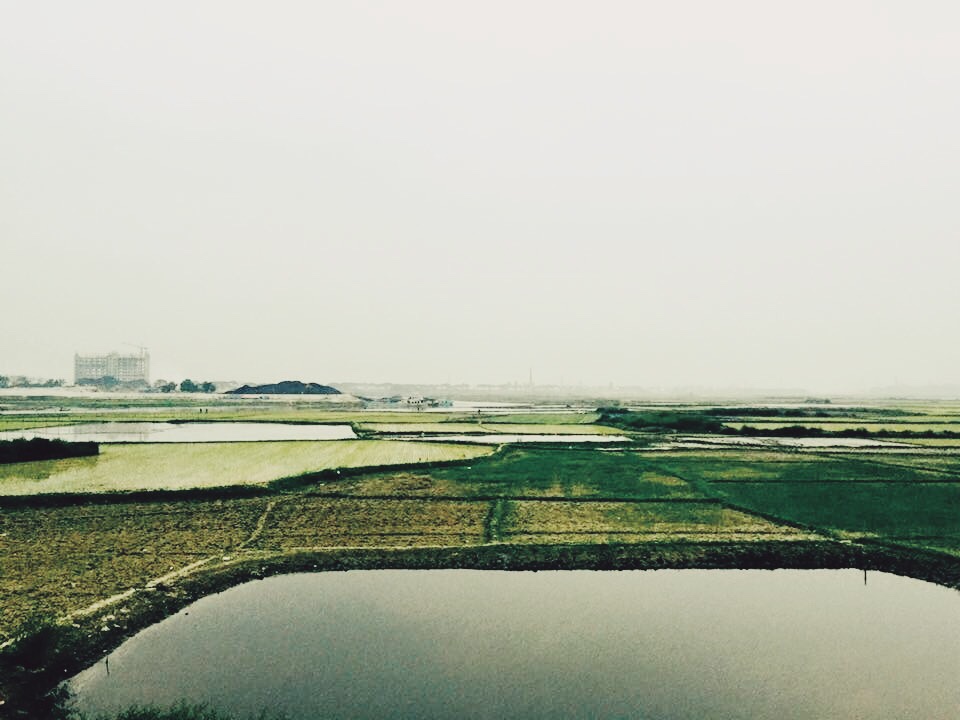 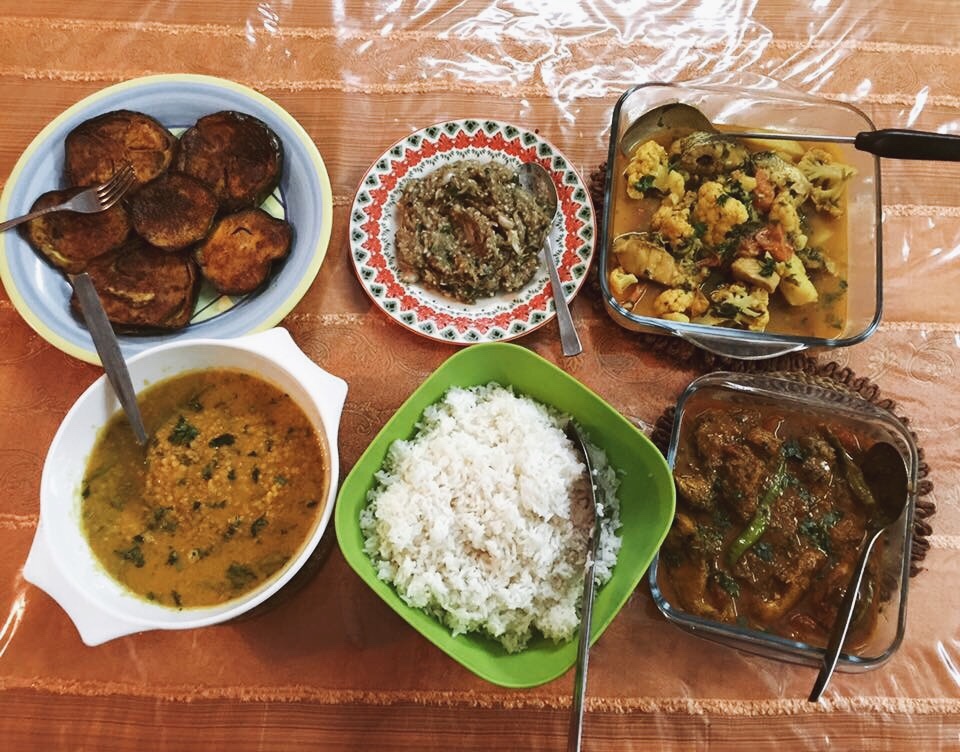 The wait for the bags takes less time than usual, but one of them turns up broken on the conveyor belt. Hazrat Shahjalal International Airport never fails to take part in my homecoming joy. Soon we are lost in the melee of familiar limbs and cheeks. Something vital seems to be missing in this happy reunion, I note. It takes me a while to put my finger on it. Fresh off the plane from the UK, I almost cannot feel a temperature. For December it feels odd…wrong. As though Dhaka was devoid of a weather.

As we hit the road, I notice it pretty quickly. The smog. What had seemed like kuasha from the plane turned out to be a bit more ominous up close. It made the city look surreal…and it never left. A permanent veil of haze that added a very distinct filter to the Dhaka winter experience. One morning I found myself peering through the bathroom window into the DOHS streets below, mulling over the notion of all this being a dream. I was almost convinced of being just a head shake away from waking up in our Ealing bed. The smog was messing me up, trying to play the omnipresent God of Dhaka City.

I used to visit Bangladesh semiannually. Every six months, I bounced back to my Dhaka life like I had never left. This time, after a year long absence, I don’t quite bounce back to my old mould. The relationships are the same but the people are different. The streets are different. I am different too. I am used to prioritising my day the way I see fit but in Dhaka you cannot do so. The parameters of priorities are different in Dhaka, have always been. I know this, don’t I? 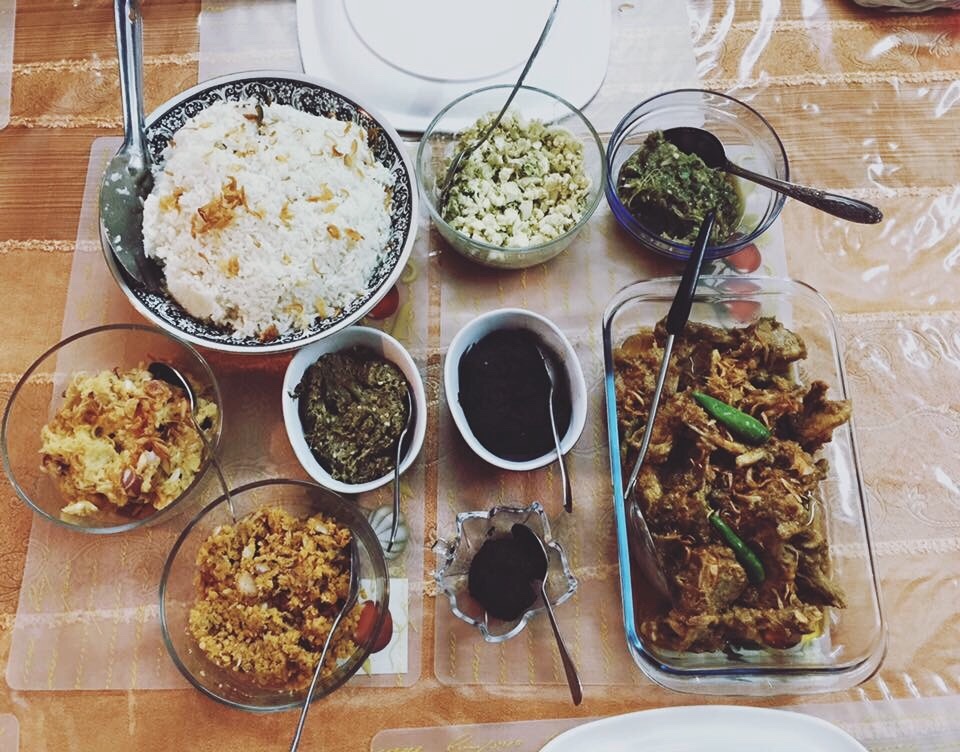 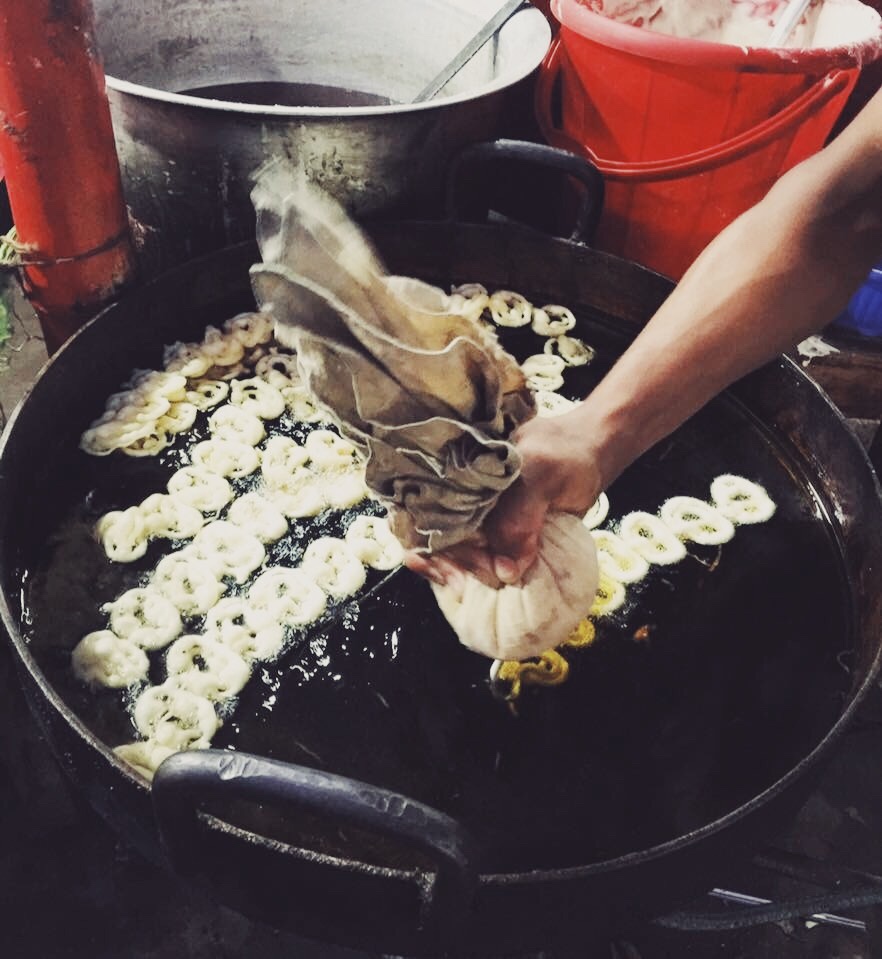 Dhaka cannot be outwitted by the latest technologies the world has to offer. The roads are not navigable by smartphones. To-do lists are impossible to tick off without intervention from other people. People – they are everything in Dhaka. Different people are meant for different things spun into different groups. It can get confusing very quickly. People are like roads that you need to navigate with love and caution, and the awareness that a lot of time has elapsed, more than you care to count. They tend to hold on to the old you while you hold onto the old them. It takes time to work around each other’s needs for the ghosts of yesteryears.

December in Dhaka is synonymous to weddings. There is little room for anything else other than attending them or avoiding them. Both are hard tasks. Attending weddings after a break made me look at them in a whole new light. I could not help but admire the facades we have mastered as Bengalis, something that comes into full force in the festive season. Everyone is impeccably dressed and on point. Smile at the go, clutch steady as you please. This is done day in and out, no matter how one feels inside. You have to shelve your vulnerabilities as you walk into Hall X of Bashundhara Convention Centre and commit to putting your best foot forward. You have to mingle, smile, pose. If I was a working woman in Dhaka, I am fairly certain I would have been awful at wedding attendances and appearances. Some workdays I can’t face the kitchen, let alone 1000 guests. 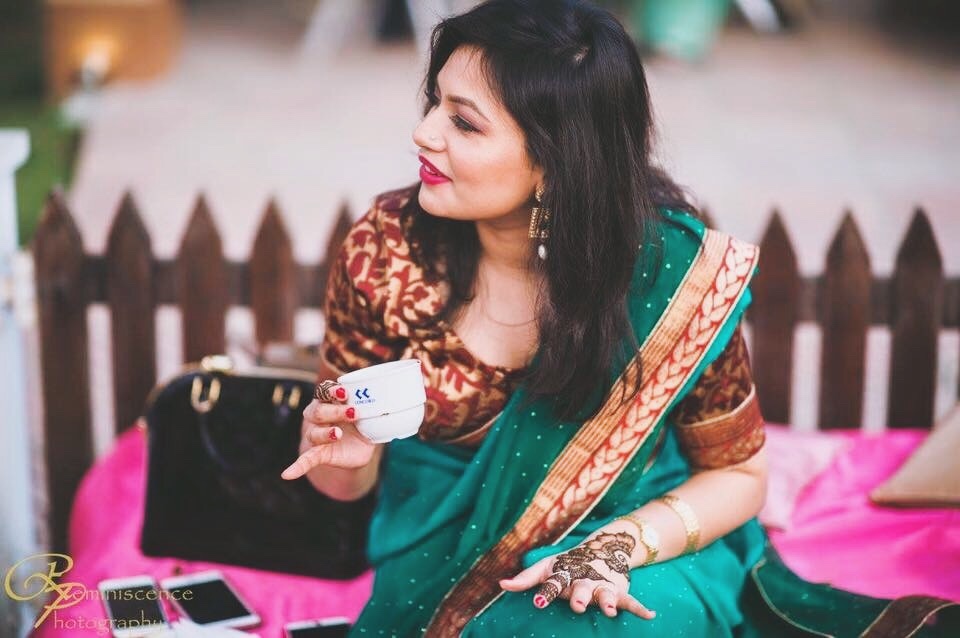 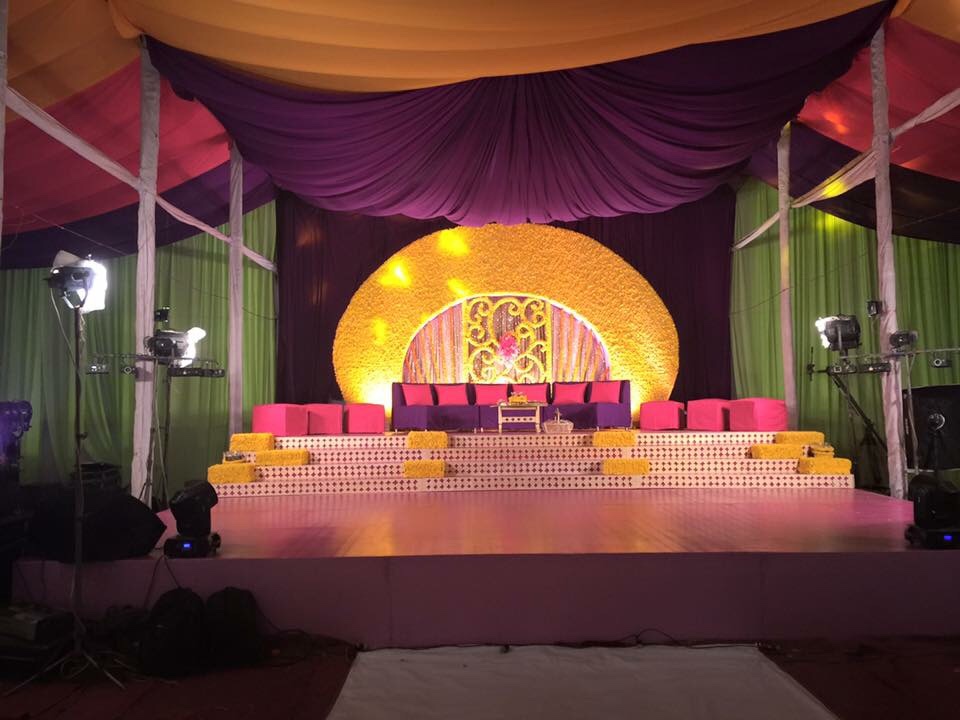 Butlers check ins and a few weddings later, the holiday feel fizzes out. I feel closer to my old mould…the city feels more under my grip. I remember better the ways of life here, so far removed from the one I live in another corner of the world. It makes it easy to pick on the things I have missed, the new, the different.

While I have grown up, Dhaka has grown out. The city is developing at a precarious speed, much like me as a learner driver. A young learner has nothing to lose, it only seeks progress. Even if it means turning into a throbbing mass of organized chaos that has no control over itself. Towering apartments and neon cafe lights reflect on beseeching faces of beggars at the Gulshan 2 signal. We curse the traffic. We curse the weather. We want to wear our fancy pashminas to rooftop parties but it just wasn’t cold enough. 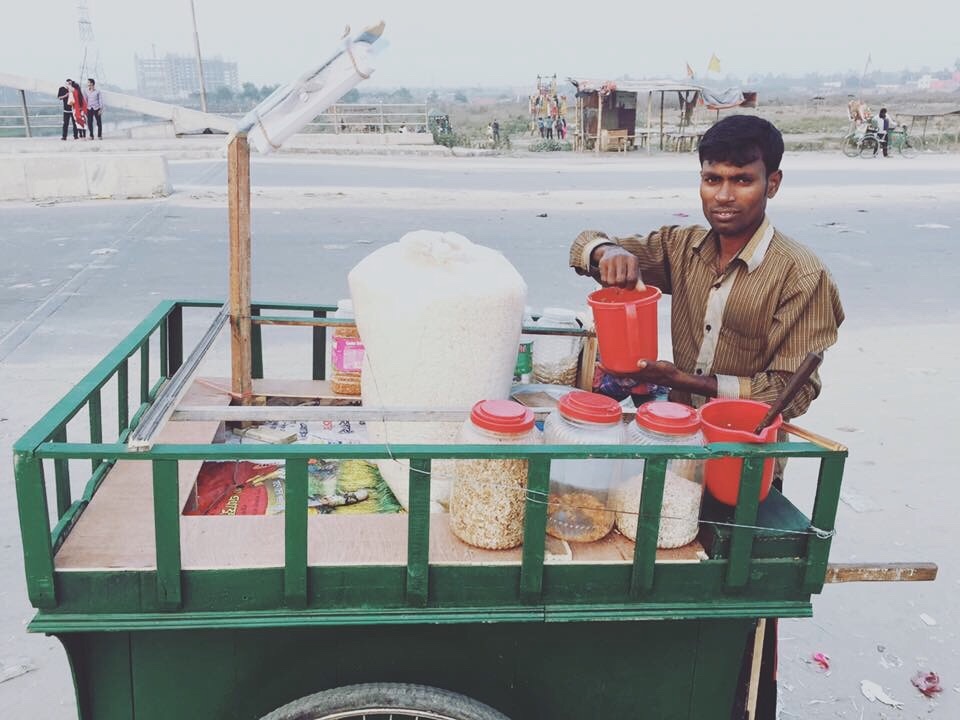 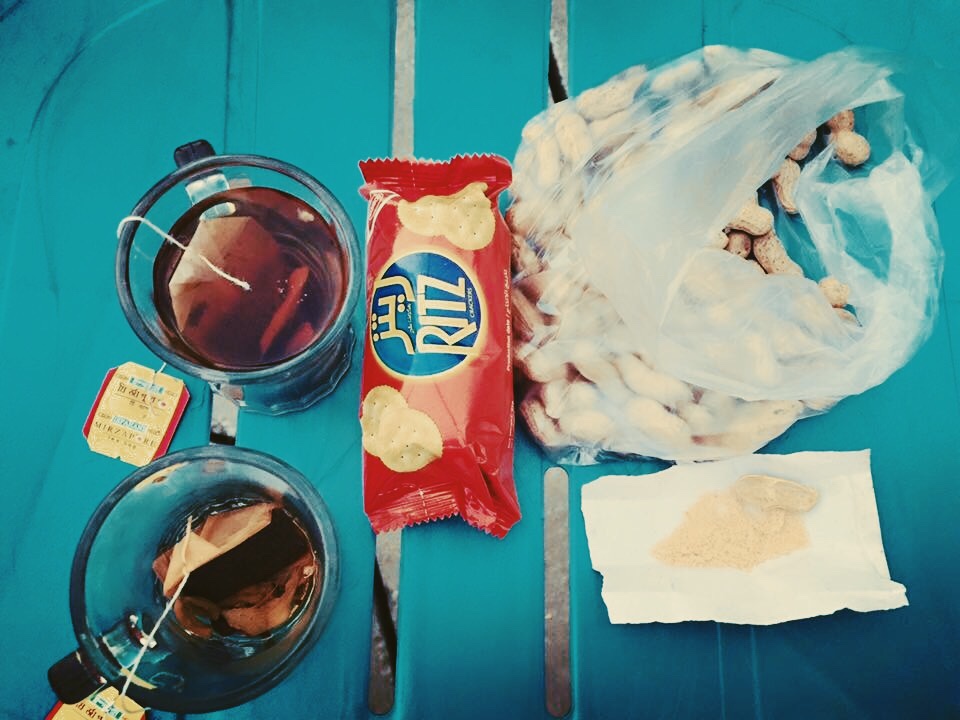 We try to notice the new hangout spots worth going to. Premium Sweets is highly recommended so we head off to get our hands on some deshi food. I take a seat facing the windows, observing the Gulshan 2 signal splayed out under the mellow winter daylight as I dig into hot tubs of khichuri. The timer keeps lying, going from 200 to 0 and back. Nizar pours himself a just-unbottled glass of coke and something clicks. I can’t help thinking of the stream of gaseous liquid as the soul of Dhaka at the signal behind his shoulders. Opening up to the world outside from it’s confinements of urban density, poverty and corruption any way it could, frothing uncontrollably as it flowed. Moving somewhere….everywhere. Organized chaos in all its glory. 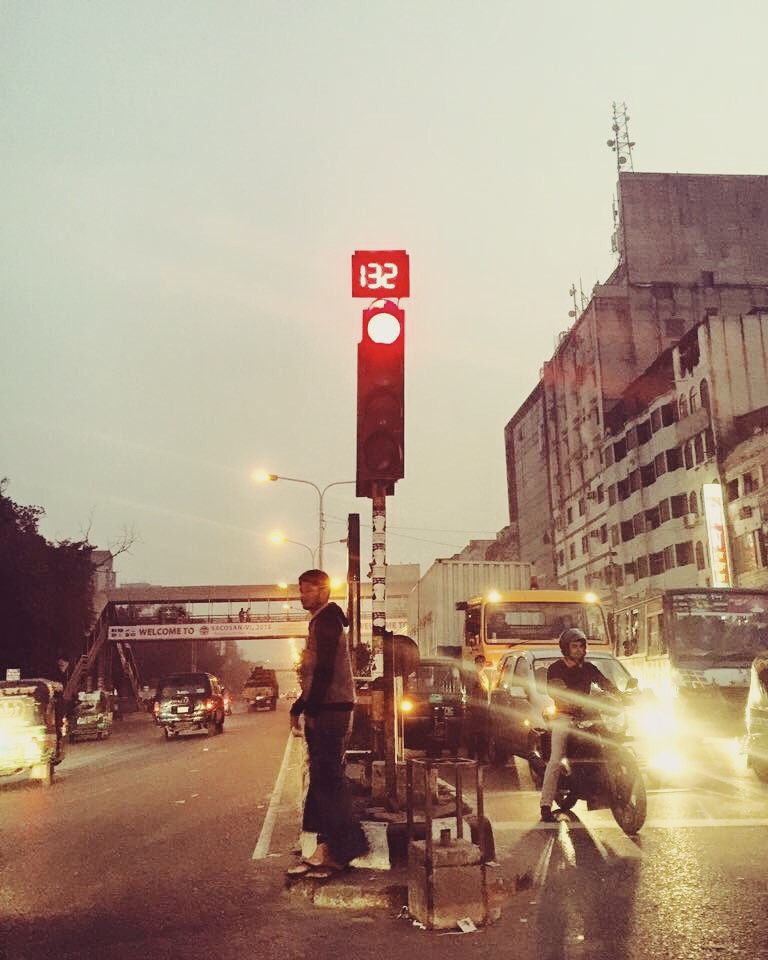 Food is big in Dhaka, second only to people in the priority list. Despite coming across some impressive new restaurants, I find myself more amazed by the coffee chains. Once upon a time, coffee was a concept confined to tonger dokans and Coffee World. Most people went to a tong for chaa and Coffee World for its smoked chicken sandwich. Coffee was always an add-on, an afterthought. But the scene has changed. Coffee shops are a force to reckon with. Some have come to the shores of Bengal from as far as across the Atlantic. It’s the place for meetings, hangouts, family gatherings, dates, soul searching, social media gathering, post wedding check-ins and many more important aspects of the Dhaka life.

I am always eager for coffee so I try to go to all these promising ventures. I see lots of English speaking men and women serving as baristas, smartly dressed and seemingly well educated. I am extremely impressed by their impeccable customer service. I am curious to know what their backgrounds are. These were educated kids. What were their salaries like? Abysmal, says someone. 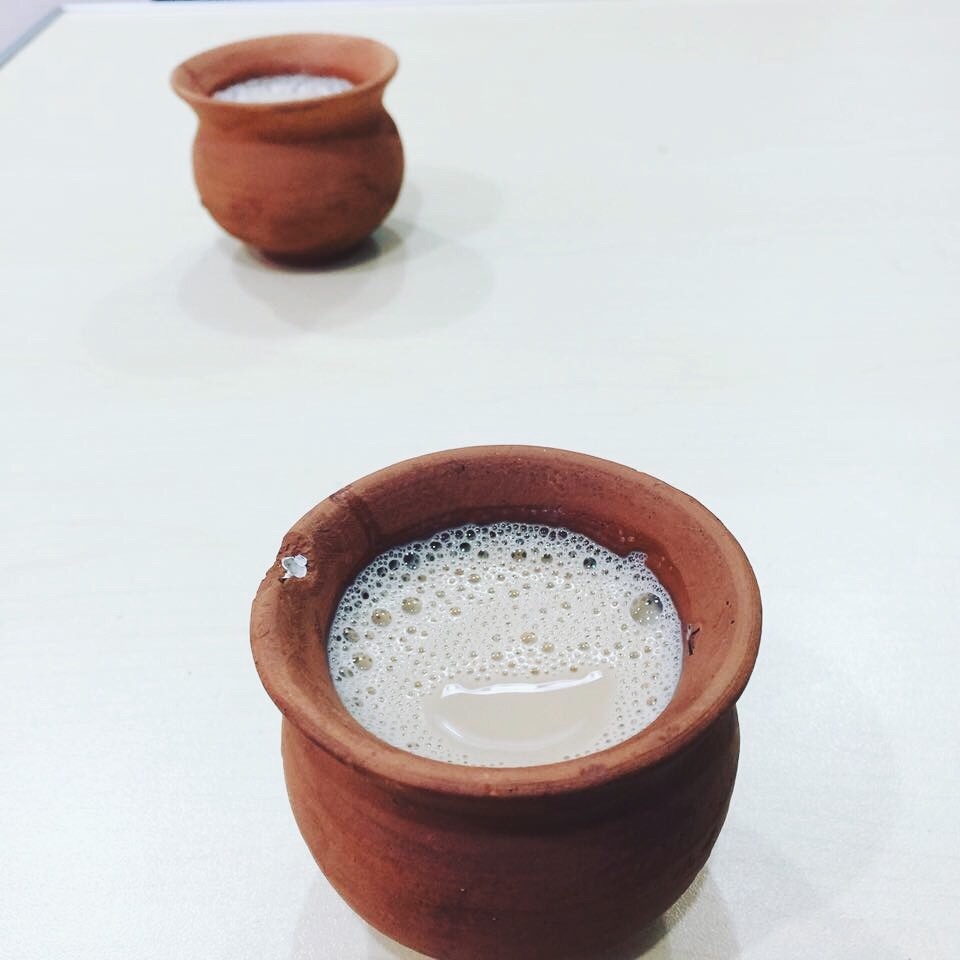 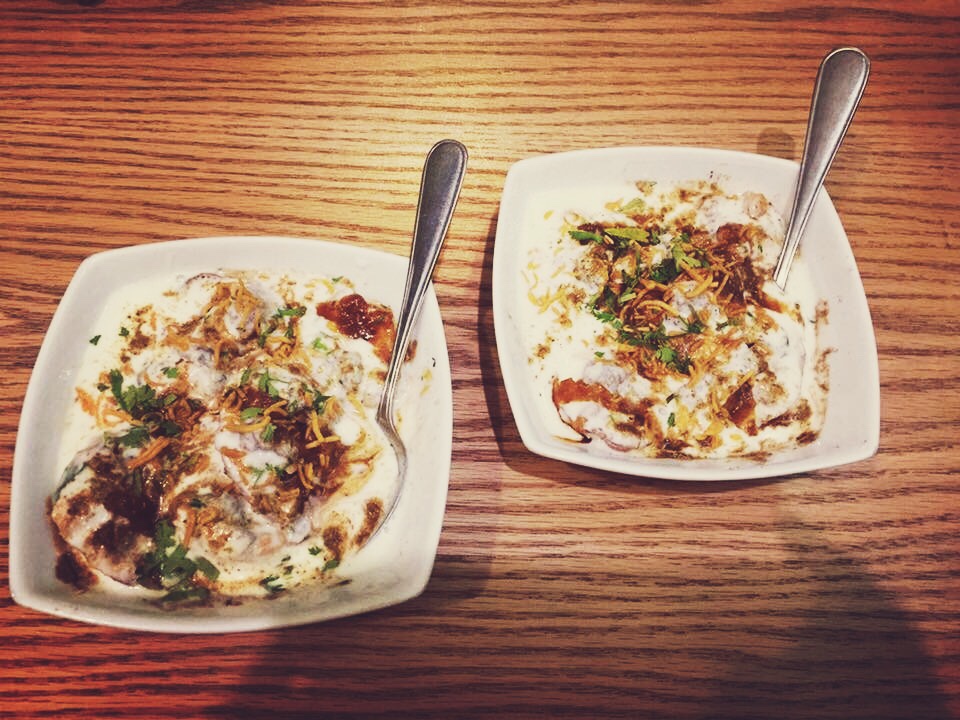 A friend takes me to Bread and Beyond and I am secretly taken aback by their menu. Growing up, I didn’t have a clue what a quiche was, and certainly couldn’t pronounce it. These days you can find Banoffee pies at Tastebud, a British dessert that I love. A big banner in Banani Egaro promises the advent of Krispy Kremes. Dhaka is no longer how I have known it. Adamant to grow an international appeal, it’s hoisting itself up the developing country ladder with a cutthroat determination you are sure not to miss.

Shopping in Bangladesh is no longer confined to traditional means. I made my first online purchase through bKash with the help of my driver bhai (people, remember?). It seemed to be a convenient thing to do. Unlike most other things in Dhaka. Travel being the numero uno. Travel in Dhaka is perhaps the only reason it hurts a little less to live so far away. My UK life revolves around Google Maps and the tube, making me feel independent in my day to day business. In Dhaka, I cannot travel to most places without a chaperone. 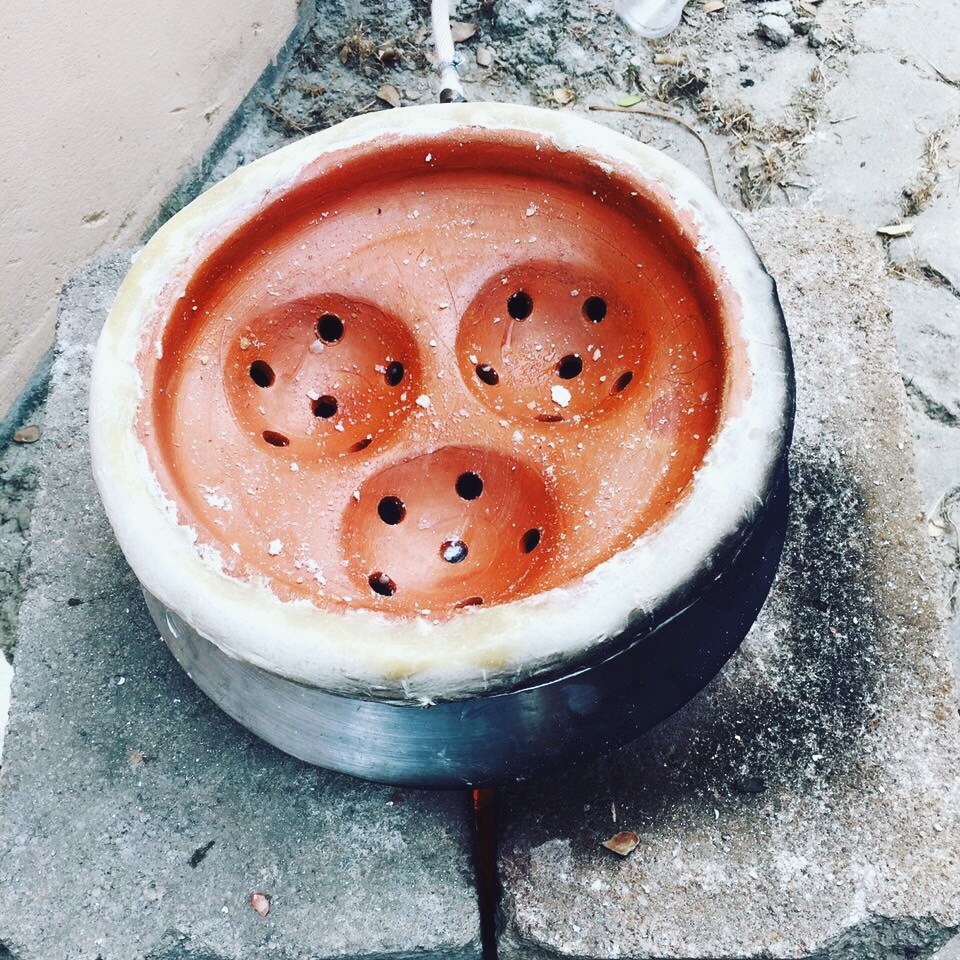 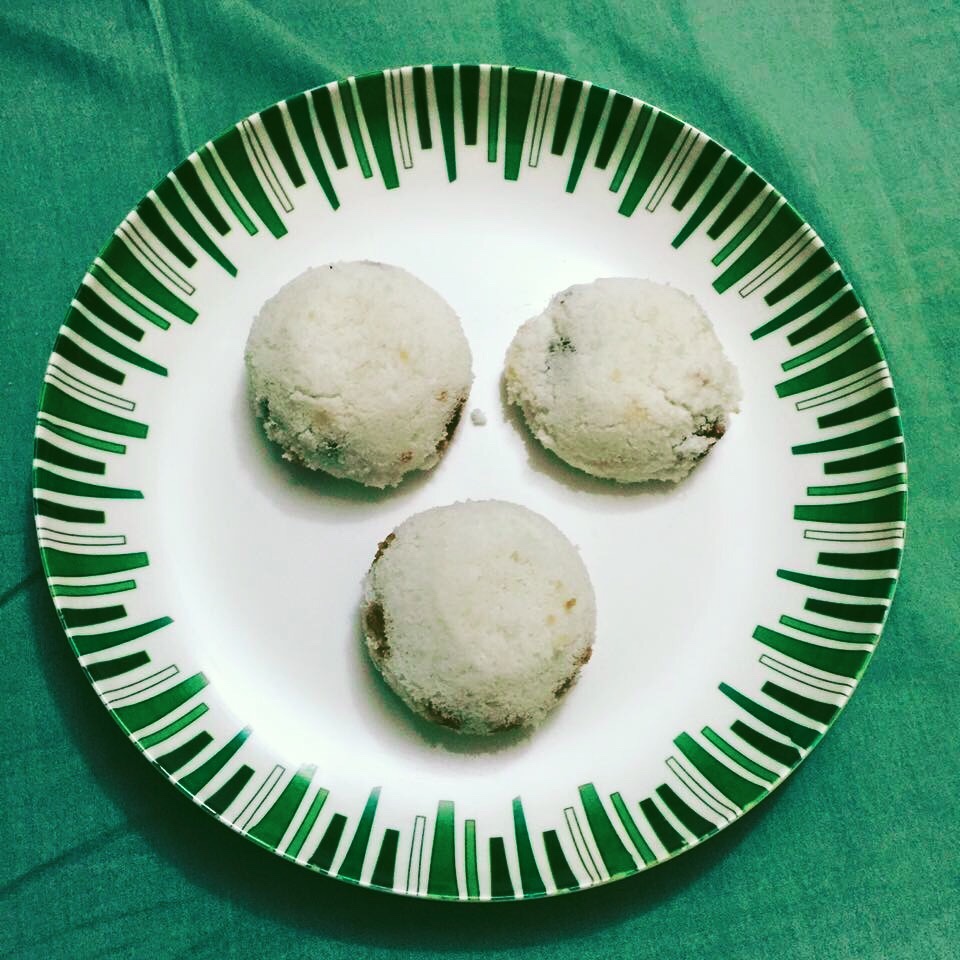 Eventually I got fed up of trying to keep up with it all – the time, the traffic, the plans within plans people insist on making, the inability to go to to places on my own. There are tons of people to do your chores for you but this invariably creates many single points of failure. What happens when driver bhai goes MIA and neither you nor your wife can drive? You have to commute in the morning and attend three dawaats at night and the wife has to go to the parlour in between. Suddenly your life comes to a standstill. In the same week, the chauffers at my mother’s and inlaw’s houses go missing without notice. A friend calls me up and says the same about hers. Three driver bhais in my inner circle taking off within a span of 7 days is a damning statistic. People, oh people.

No amount of time seems to be enough to soak up all the chaos. There was still so much left to hear and see. Soon enough the Husband and I were boarding the plane to … home? I don’t know how to term these cities anymore. All I know is that I love them obsessively, whether they love me back or not. They mean more to me than most people in my life. I used to love the idea of belonging. The kind you only feel at your birthplace. I have gone so long without it that I have given in to becoming a nomad in spirit. An observer, a witness. Of cities, of people. Of Dhaka. Of home. Of homes…