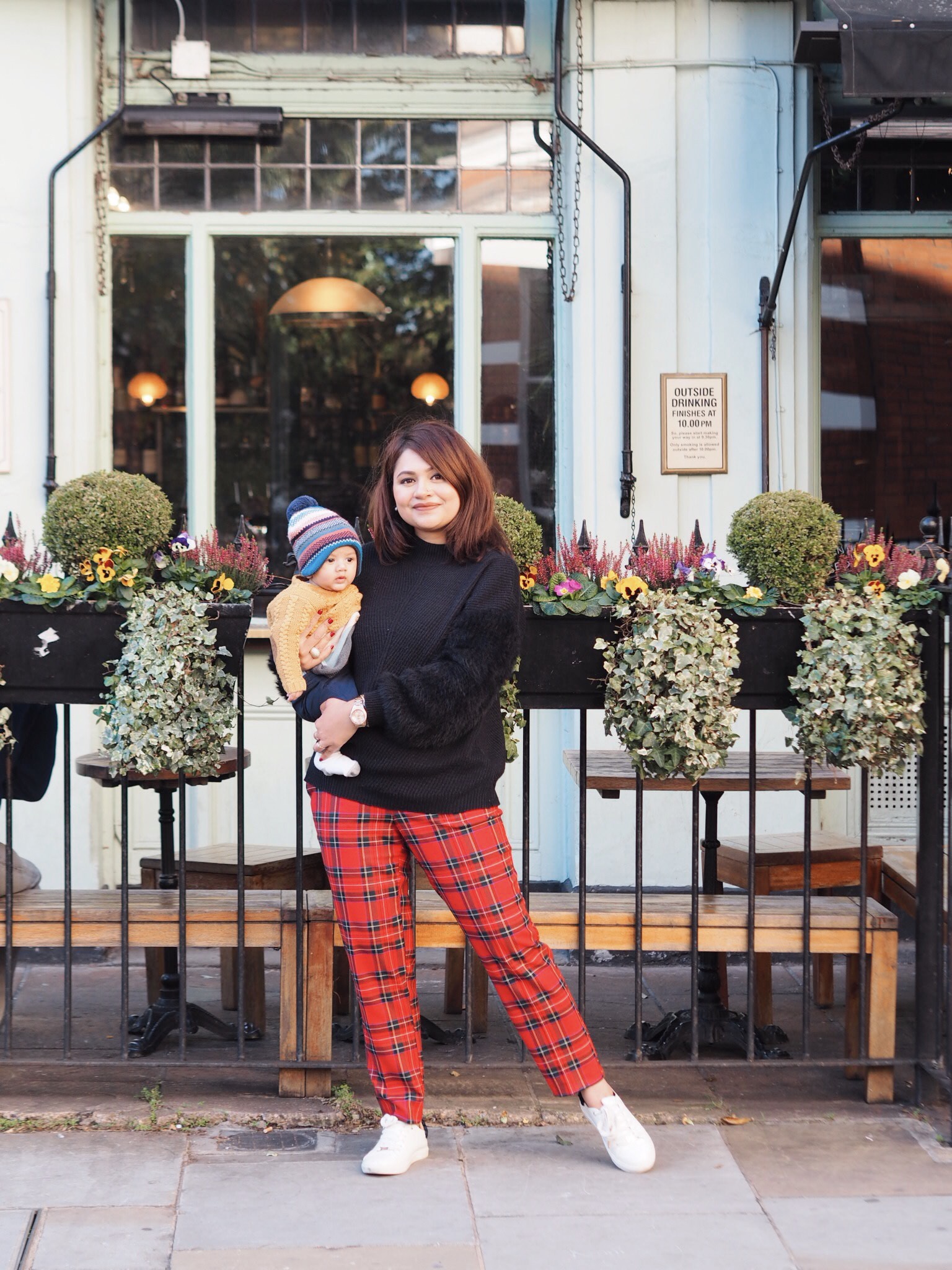 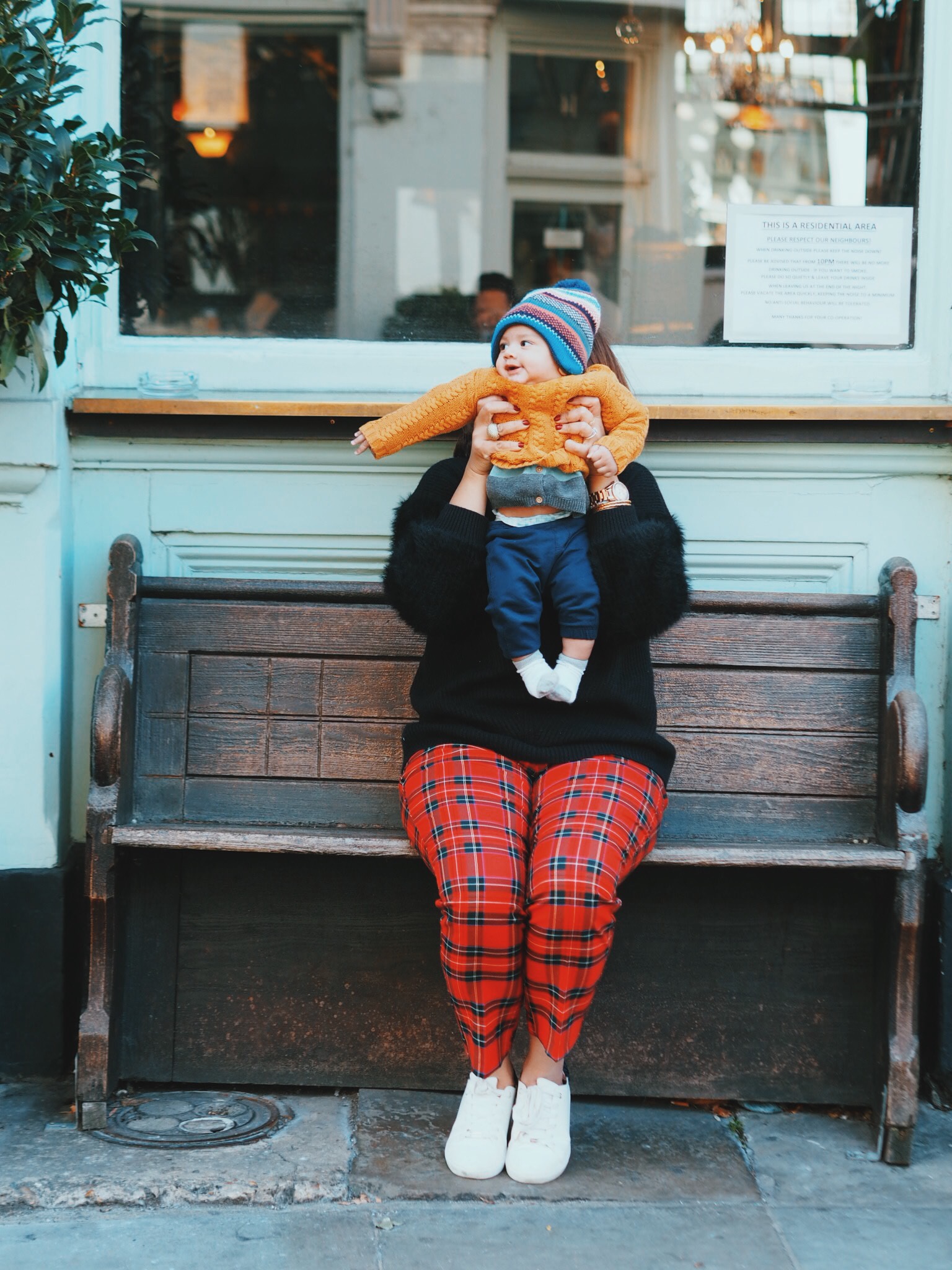 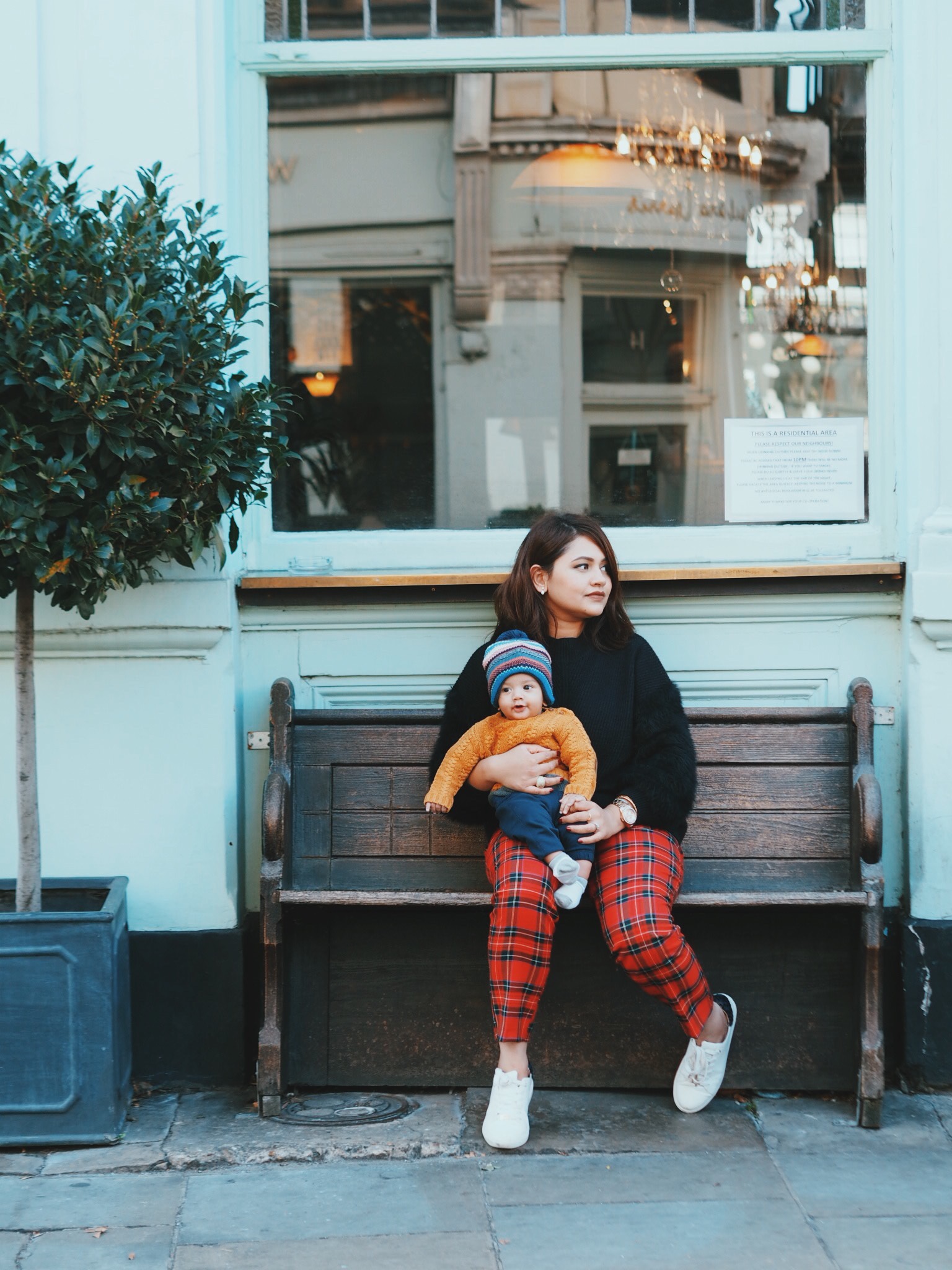 Planning a day trip to London used to be a regular bit of work for me. I was nipping in and out of the city on a weekly basis, working at Heathrow, spending weekends crashing at friend’s places and eating our ways through bottomless Sunday brunch. Insert a baby in this happy-go-lucky, vagabond life spread across two cities and suddenly, it’s a completely different set of maths.

The word London now sets off all sorts of alarms in my head. My newly acquired seventh sense of motherhood flags risks, hazards, and other anxiety-ridden emotions. Getting a stroller and a baby around the underground can be tough even with the most generous Londoners giving you a hand. But I’d be lying if I said my heart doesn’t race at the excuse to return to my favourite ex-home.

A few Mondays ago, we set out from Southampton Central on the slightly delayed 10:30am South West Train service to London Waterloo. Our main agenda was to sort some urgent paperwork but a London trip can never be complete without eking out at least one or more things on the side. In the olden days, that would mostly involve hunting down internet famous dishes and chronicling them on the gram. Obviously I have been lagging behind on this activity with a baby attached to my hips, bosom and [insert body part]. A list of cute cafes that has cropped up in the ever expanding London food scene was lurking in my iPhone notes. I hoped to check out one or two if our agenda allowed.

Bangladesh Embassy in South Kensington is a classic example of the idiom, ‘don’t judge a book by its cover’. As you get off Gloucester Road Station and walk the ten odd minutes to the embassy, you are floored by the blindingly white houses and their wide front porches. Rich people live in South Ken, you can almost smell it in the air. The lawns are manicured, the cars shiny and the whole neighbourhood reeks of ££££. Every doorstep is a photo opportunity. No wonder weekly rentals in this postal code are in the thousands. 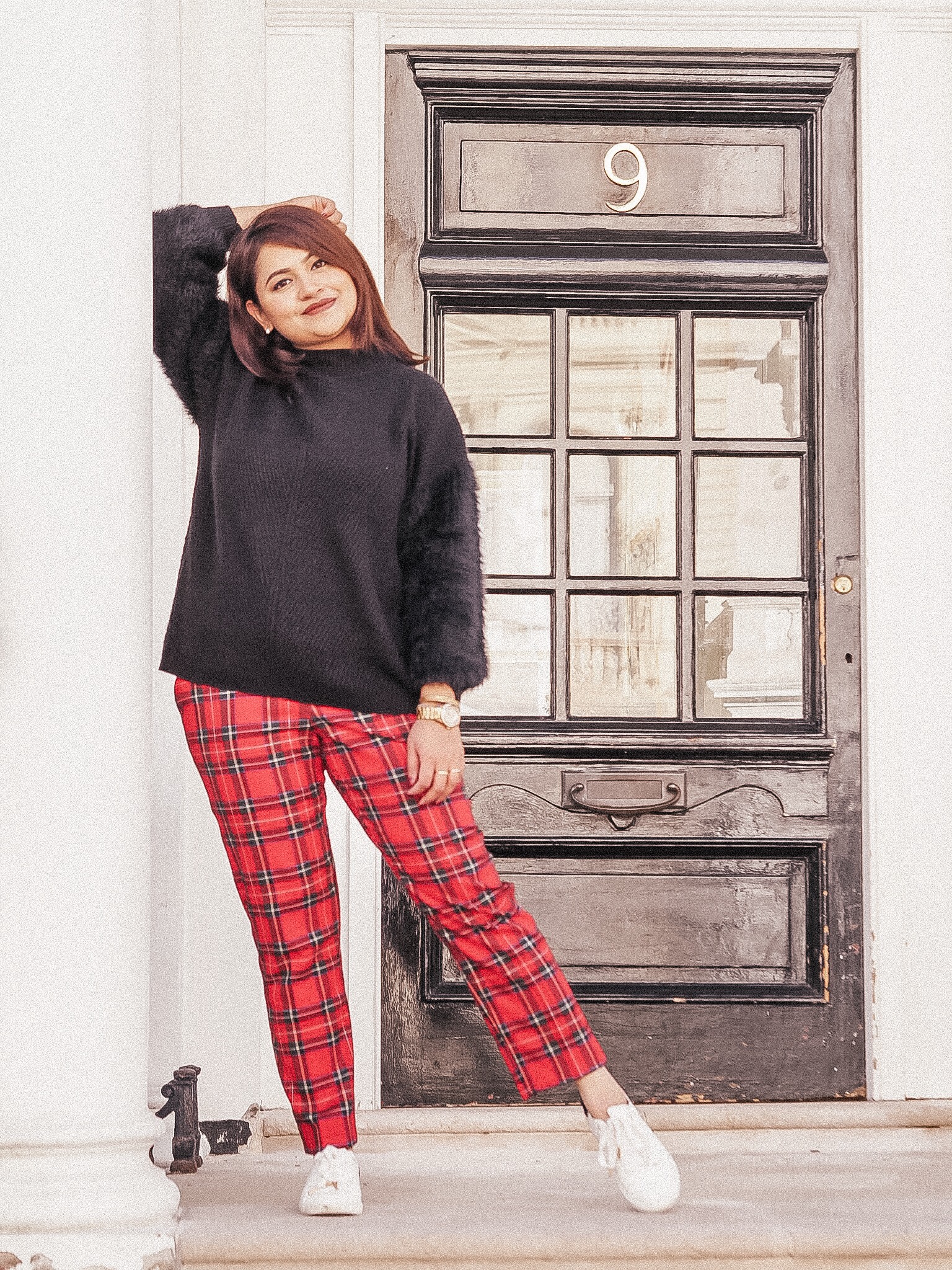 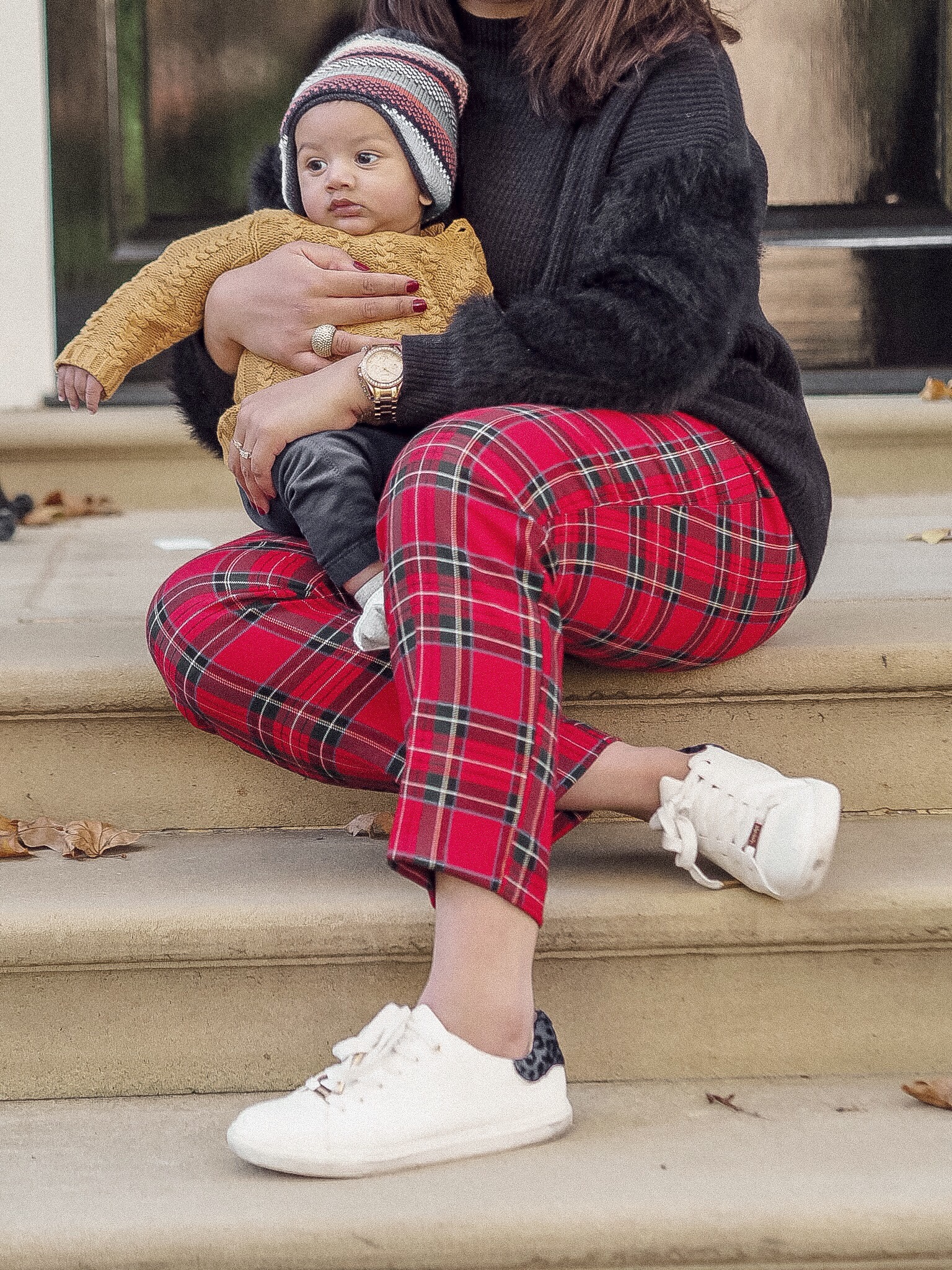 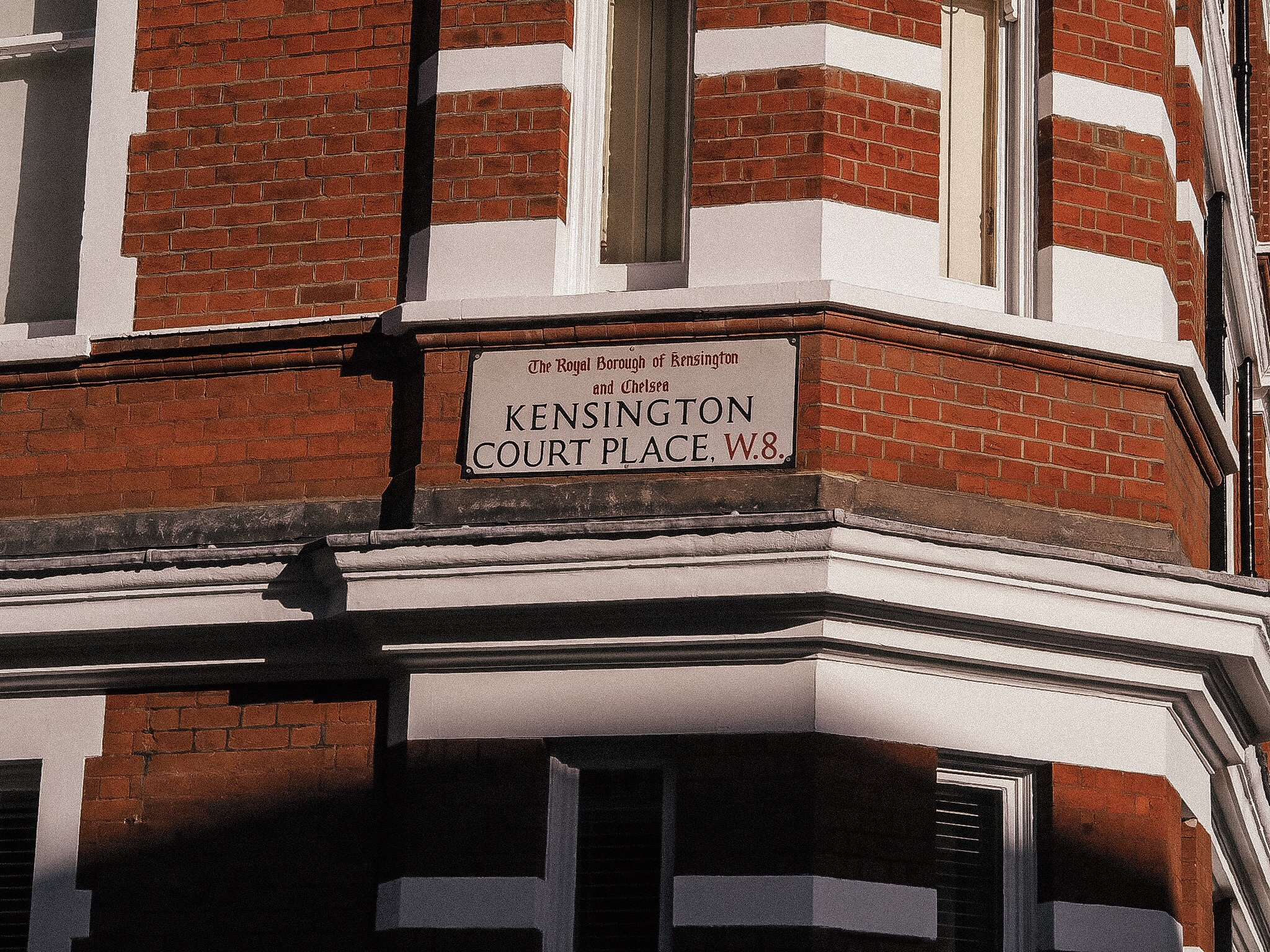 Once inside the embassy, you are met with a different story. It’s chaos. Most people are a bit on the edge, customers and customer service people alike, making you feel like you really needed to wrap up whatever business brought you here ASAP. Aryan was restless by now, hungry and tired. So, café hopping plan scrapped, we decided to build a family camp somewhere nearby for the two hours it would take for our paperwork to be processed. The newly opened branch of our favourite Indian restaurant was just a short walk away so we decided to leg it.

Dishoom opened its doors to Kensington last December. I remember receiving an email while at work (of course I am in their email list, both in personal and profession spheres) and getting super excited, the West Londoner in me jumping up and down with joy, screaming FINALLY. Dishoom is a firm favourite for us, not only for their delicious food but also their brilliant interiors which takes you back to the old Irani cafés of Bombay. 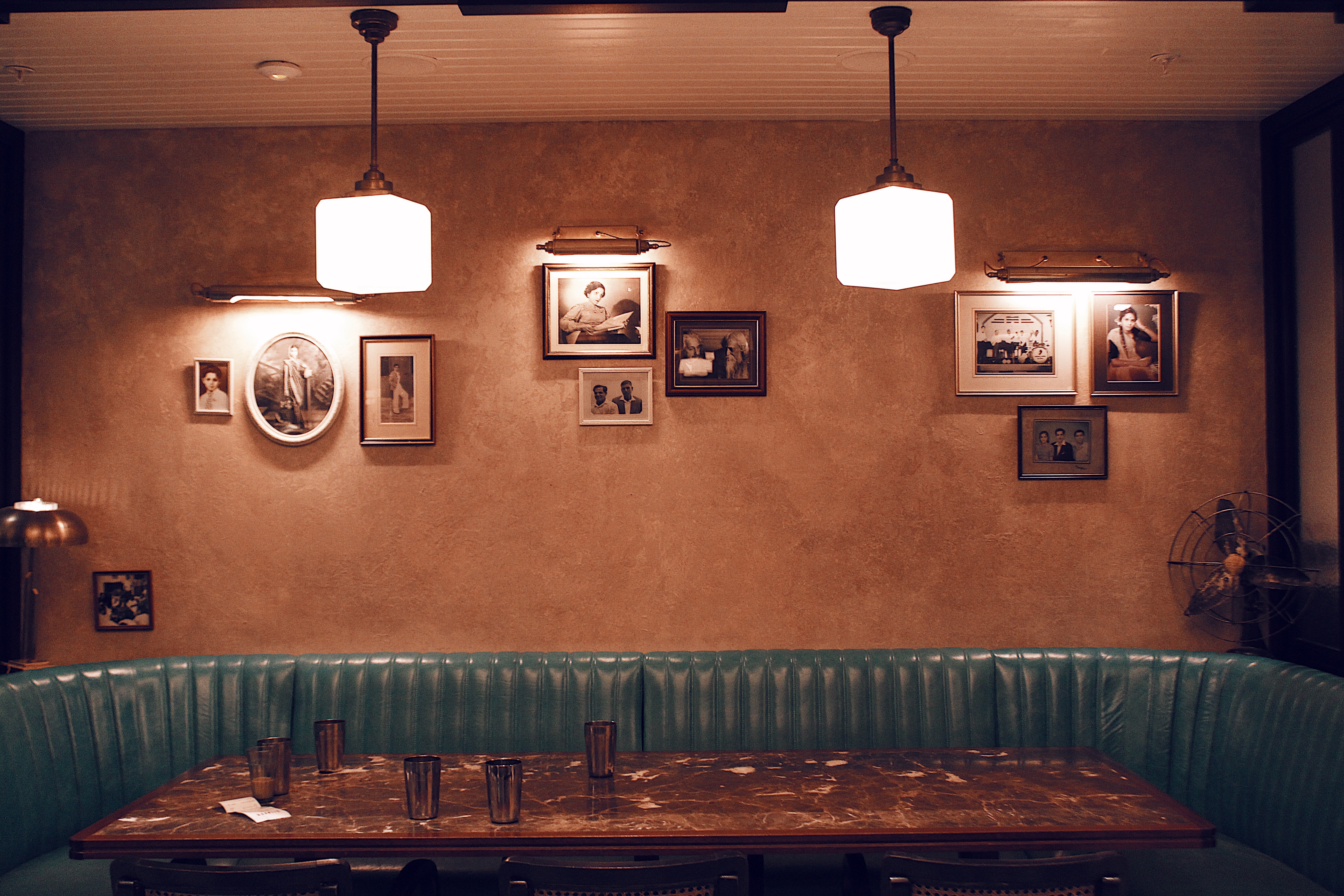 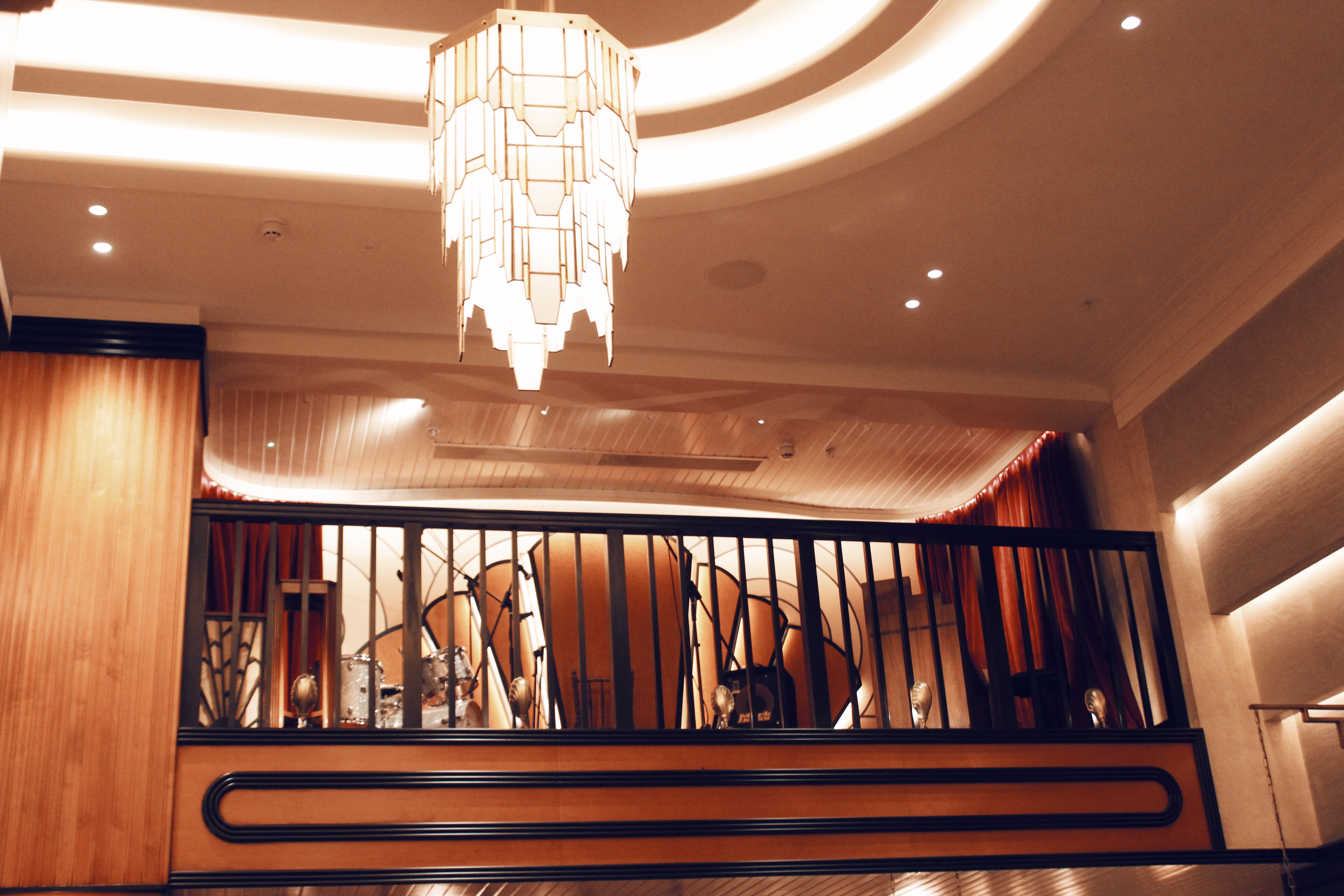 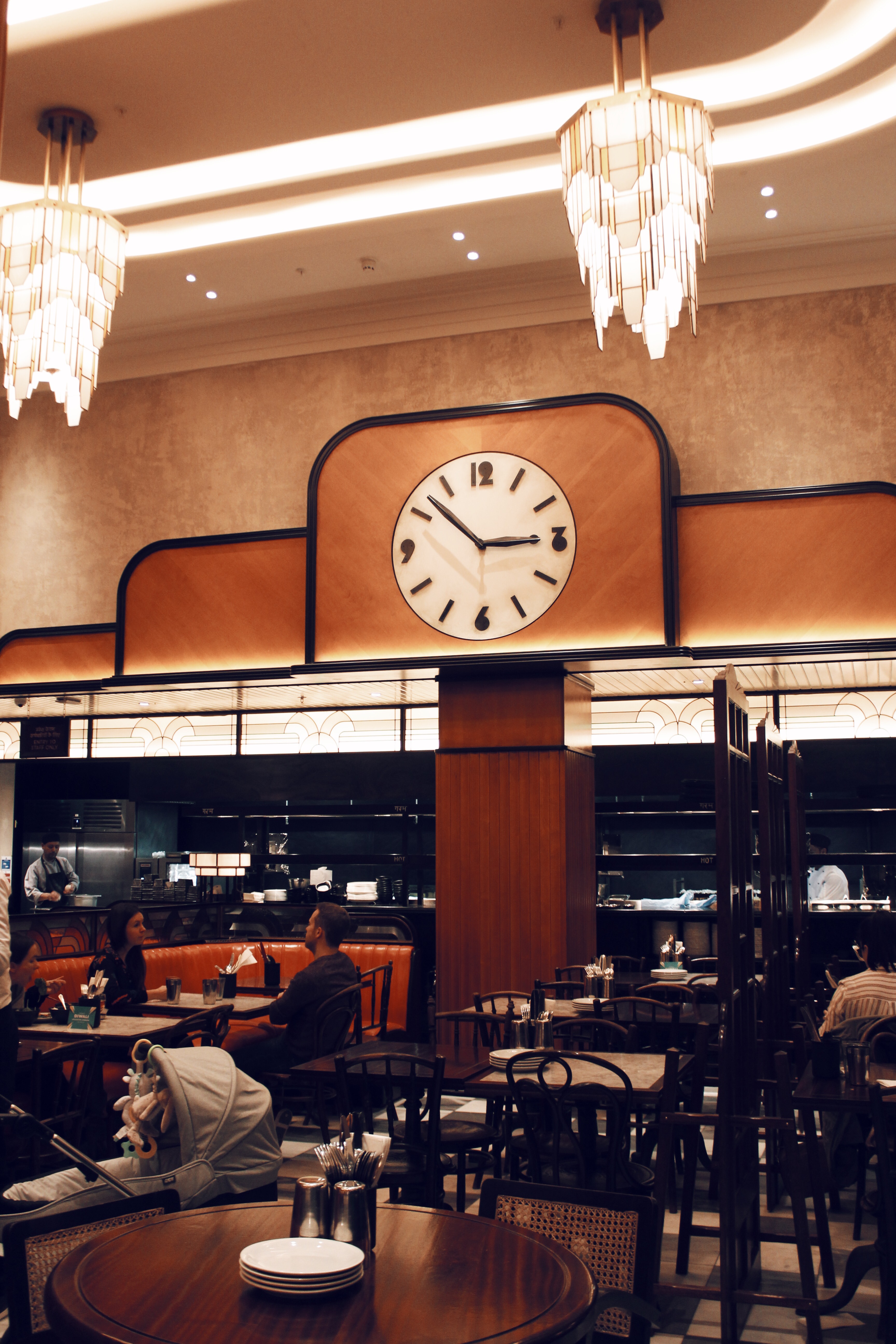 The ambience at Dishoom is always a treat. It’s like hygge got a desi makeover and turned into a restaurant. A desi brunch menu, the best masala chai, and culinary delights such as jackfruit biryani keeps me firmly engrossed in shelling my hard earned money to this franchise.

Even on a Monday afternoon, Dishoom at Kensington was buzzing. Maybe it had a lot to do with returning to the charm of favourite London haunts but something was undeniably special about the place. As we stepped off the lift and entered the cavernous restaurant, it seemed as though I had just found a secret way into the Ministry of Magic. Maybe it was the atmosphere created by the jazz and art deco inspired interiors or the big, watchful clock looming over all the razzmatazz, but it felt like checking into somewhere secretive and exciting. Like a hidden vault or bunker. 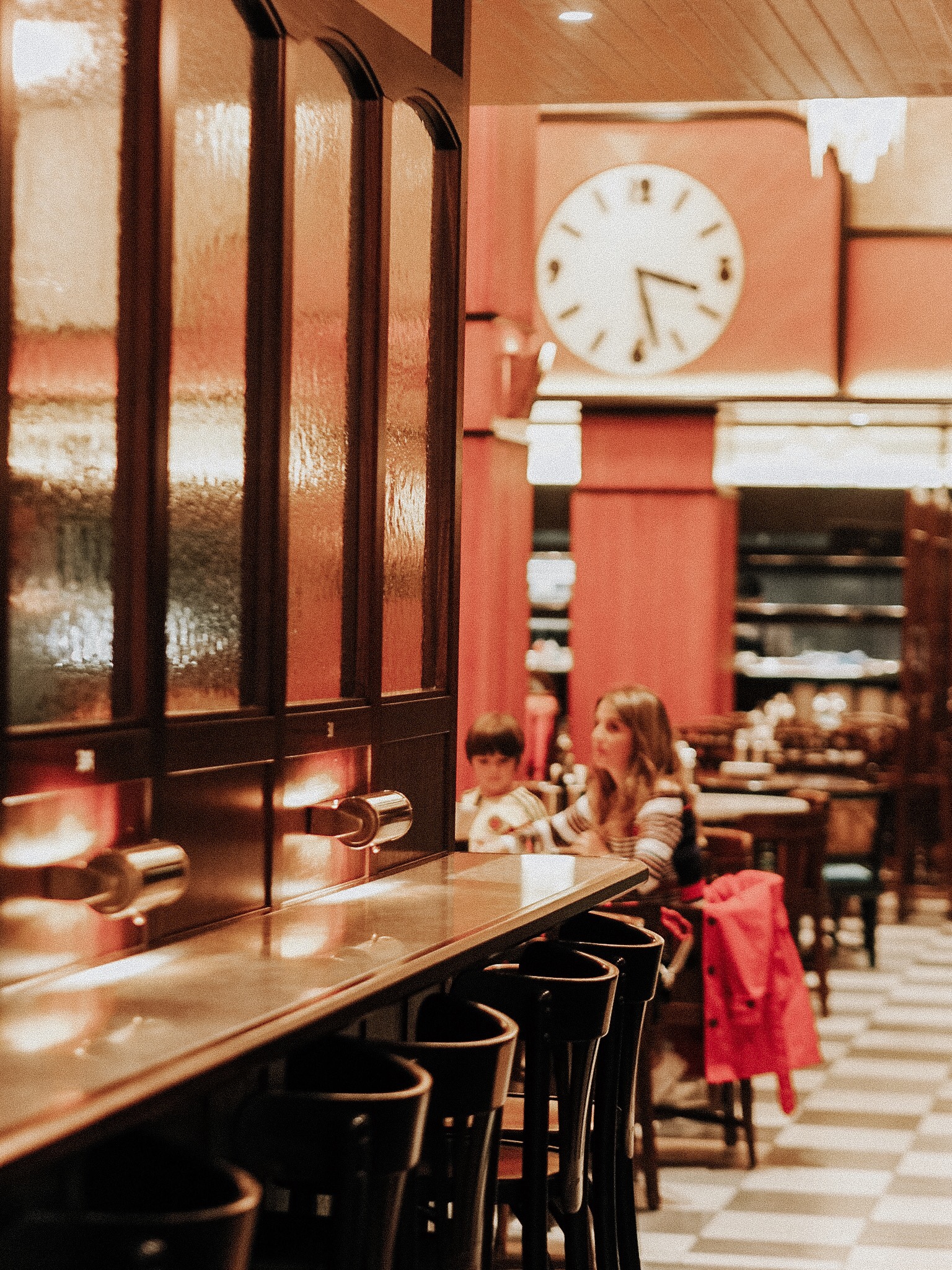 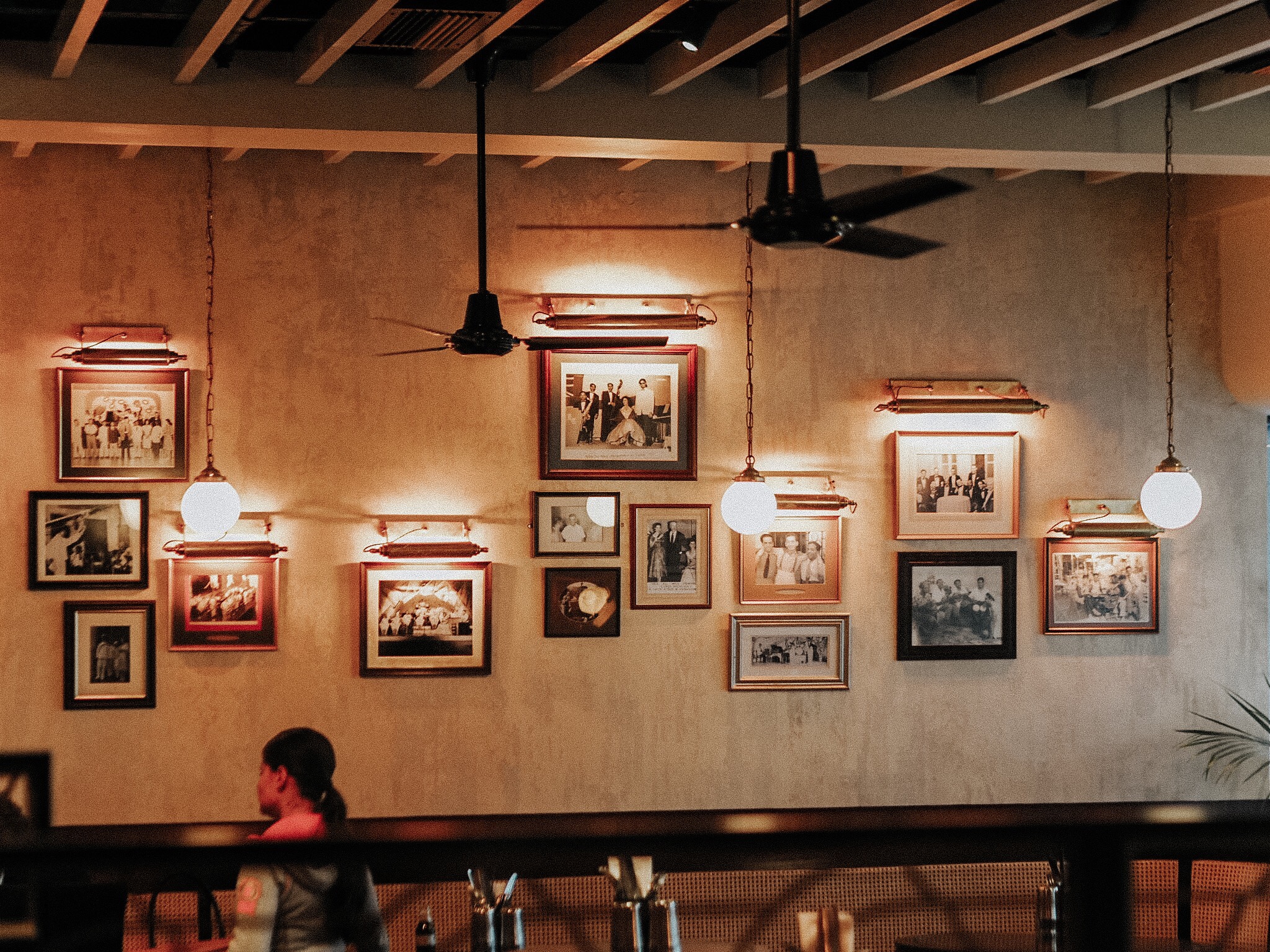 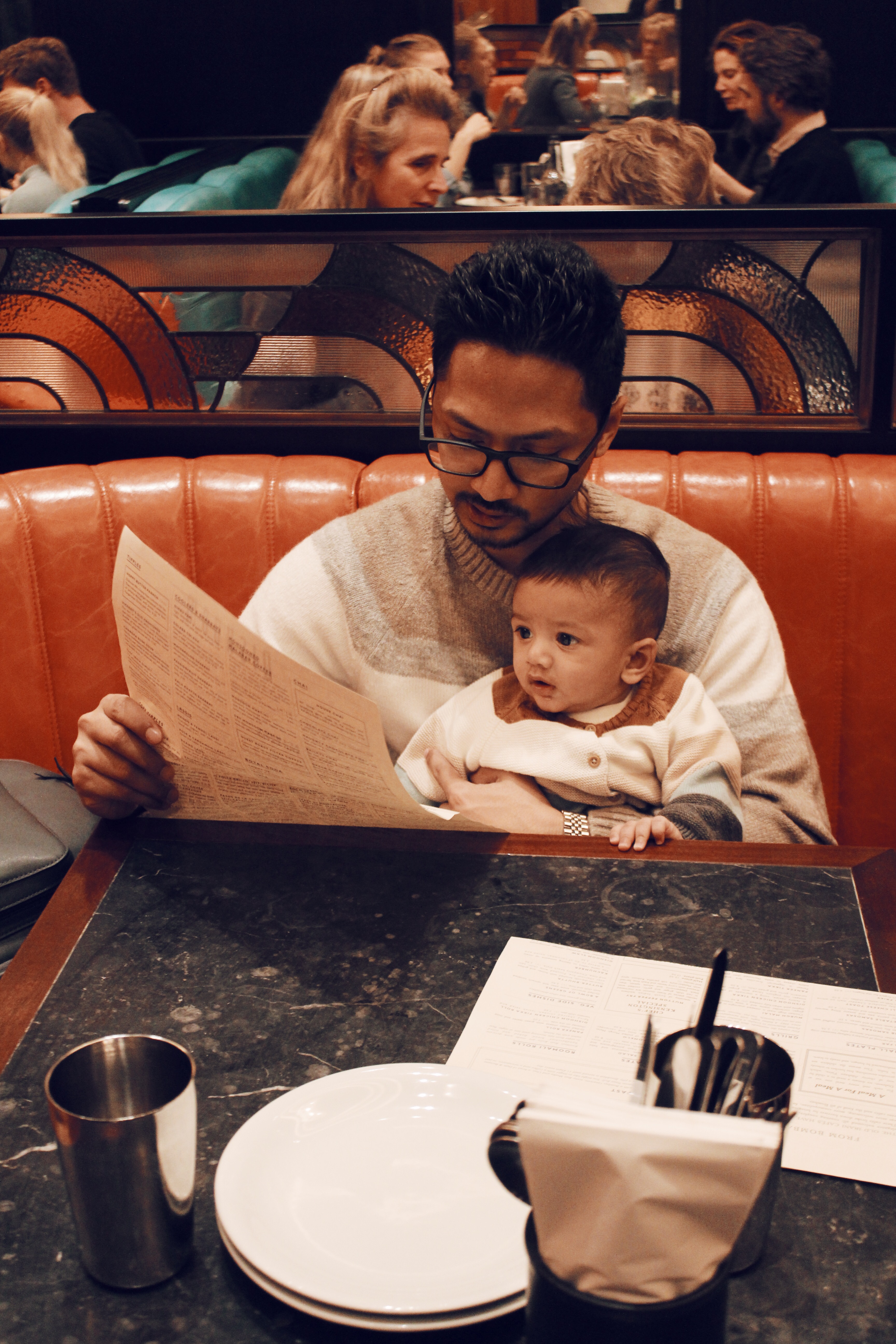 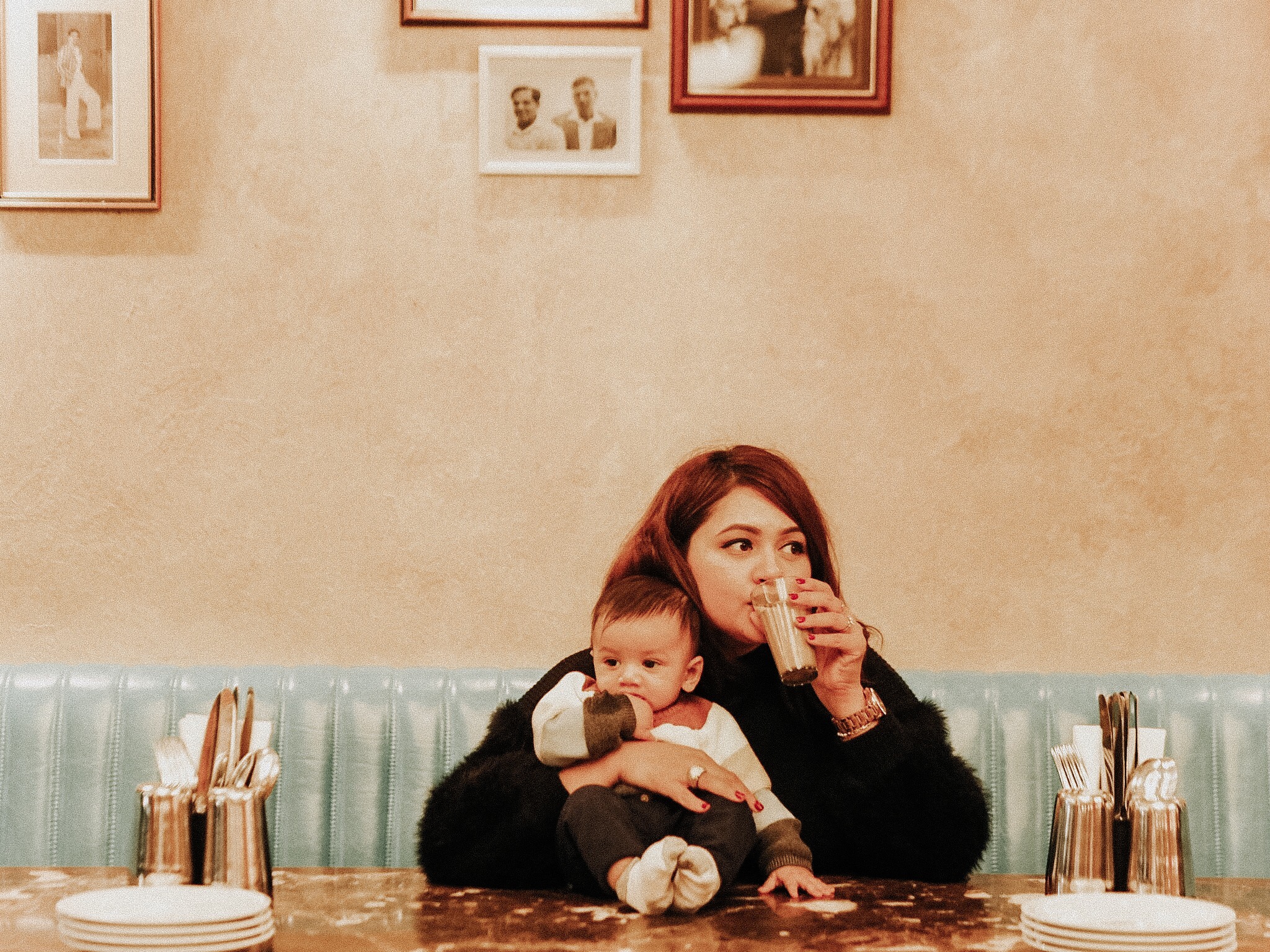 We ordered to our heart’s content, including old favourites masala chai and house black daal plus new items chole poori and mutton pepper fry. We took advantage of bottomless chai – only the first round is payable until 5 pm. In the evenings, this delicious potion is served to waiting customers for free, keeping them firmly in place in hour long queues. We have braved many a cold waits in such fashion, wrapping frozen fingers around little shot glasses, exhaling cardamom spiced winter air. That pre-kids life where anything was possible, including hours of queuing in shite British weather, seems pretty luxurious in retrospect.

After picking up our paperwork from the embassy, we headed back to Waterloo. It was rush hour, making the tube look and feel more like cans of sardines than human transporting machines. No one offered me seats even though I was wearing Aryan – a first for me on the tube.

We managed to catch the 5 pm train back to Southampton. It was jam packed, so we eventually settled on the floor. I had people sitting few feet away from me, watching me nursing a little baby, but no one budged. No one so much as gave me a kind look. I was shocked. I started planning the vigorous laundry load – our clothes, the feeding scarf, the K’Tan, possibly even the diaper bag. I was glad to be returning home and getting away from unhelpful people. And icky train floors. So long London!